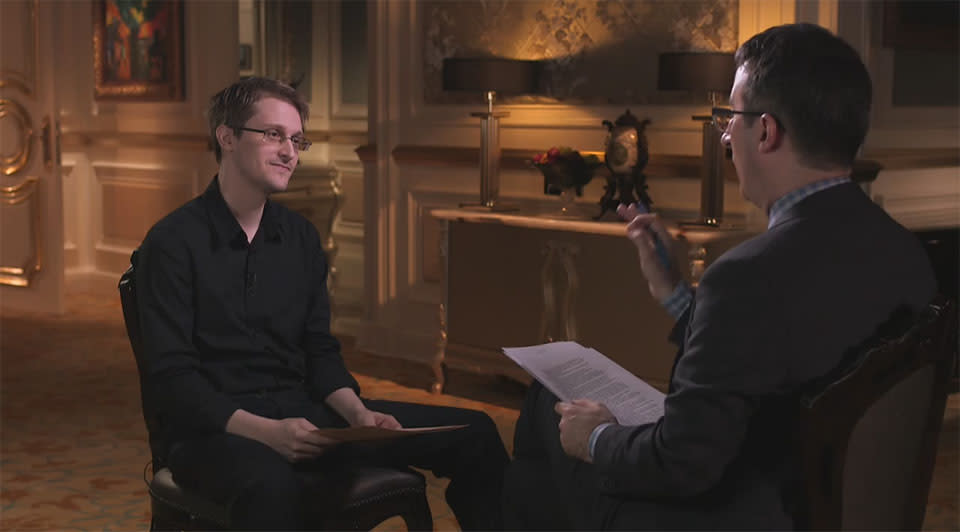 In a surprise interview with Edward Snowden, John Oliver made NSA spying revelations more relatable to the American public through the topic of dick pics. The HBO comedian, who gives his satire a sharp bite via exhaustive research, traveled to Moscow for a sit-down with the infamous whistleblower. Oliver wasn't joking around at first when he called a Snowden leak that put al-Qaida intelligence at risk "a fuck up." He added, "You have to own that. ... You're giving documents with information you know could be harmful." After an awkward pause, Snowden said, "In journalism, we have to accept that some mistakes will be made."

The tone lightened up after that, however. Oliver had proved earlier that many Americans don't care about NSA spying via several man-on-the-street interviews, with many folks confusing Snowden for Wikileaks founder Julian Assange. However, once he framed it in terms of private photos, the same people were outraged. One actually said, "If the government was looking at a picture of (my husband's) penis, I definitely feel it would be an invasion of my privacy." Oliver told Snowden, "This is the most visible line in the sand for people: Can they see my dick?" From there, he went through NSA programs like PRISM and asked Snowden to "explain to me its capabilities in regards to (a) photograph of my penis."

I guess I never thought about putting it in the context of your junk.

Snowden's answers were hilarious and horrifying at once. He described how the NSA can see your private photos, even if they're sent domestically. Citing PRISM and Google's Gmail, for instance, he said, "When your junk was passed by Gmail (to a foreign server), the NSA caught a copy of that." In the end, however, it was Oliver who gave a Journalism 101 lesson in making complicated things easy to grasp. Snowden said, "I guess I never thought about putting (the NSA leaks) in the context of your junk."

In this article: dick pics, Edward Snowden, hdpostcross, Interview, John Oliver, NSA, spying, video
All products recommended by Engadget are selected by our editorial team, independent of our parent company. Some of our stories include affiliate links. If you buy something through one of these links, we may earn an affiliate commission.