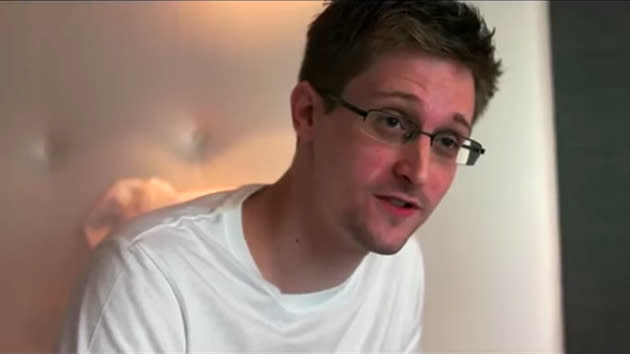 The US government insisted that there was a second source leaking intelligence data besides Edward Snowden, and we now have some extra evidence to support this claim. Laura Poitras' just-launched documentary covering the Snowden leaks, Citizenfour, reveals that this mysterious tipster is both higher in the intelligence ranks and, at least at the time the movie was shot, still serving. In other words, the leaker theoretically has access to up-to-the-minute info about the US' surveillance activities. When Snowden sees this information (provided by reporter Glenn Greenwald) in the documentary, he's visibly startled -- even he wasn't aware of another insider.

The project also provides some insight regarding Snowden's personal life following the leaks, including the necessary paranoia and his day-to-day presence in Russia. He'll get sensitive info through paper notes when there's a chance that a room is bugged, for instance, and his longstanding girlfriend moved to Russia despite the many risks. You'll have to wait until October 24th to see CitizenFour if you didn't catch its premiere at the New York Film Festival, but it may be worth the short wait if you've wanted to know more about the man who broke the NSA's veil of secrecy.

Update: The New Yorker conducted an interview with Snowden touching on some aspects of the movie as well as his efforts. A lot of it will sound familiar, although it's good background -- he remembers fretting that there wasn't enough time to vet leaks and make sure they wouldn't harm others. He also misses just about everything about his previous life (including his "old beat-up car"), and he's working on a foundation grant that will help protect journalists in high-threat areas. You can check out the interview in the second clip below.

In this article: citizenfour, documentary, edwardsnowden, internet, laurapoitras, leak, leaks, movie, movies, nsa, StevenSoderbergh, surveillance, video
All products recommended by Engadget are selected by our editorial team, independent of our parent company. Some of our stories include affiliate links. If you buy something through one of these links, we may earn an affiliate commission.