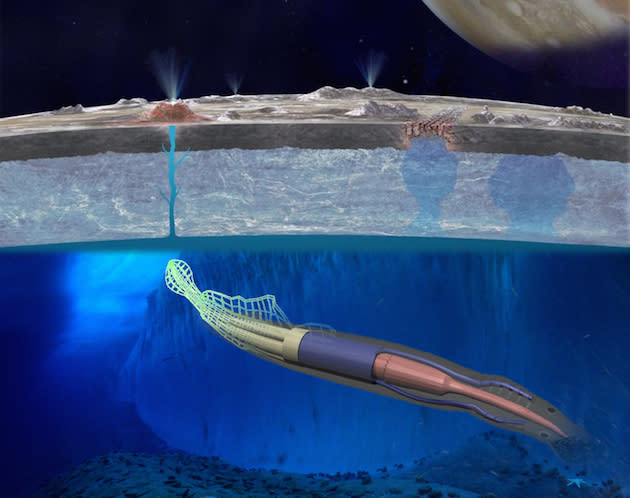 We've seen the submarine that NASA wants to explore Saturn's moon Titan with, but compared to what the aeronautics outfit's looking at for icy climes like Jupiter's Europa it's downright pedestrian. The wormy-looking contraption up above is actually considered a type of amphibious rover and it's pretty different from the Deep-SCINI we've seen previously. Because there aren't exactly electrical outlets anywhere aside from Earth and relying on solar power might not always be feasible, it has to use alternative means for energy. In this case, NASA says antenna on the soft robot's back would draw energy from "locally changing magnetic fields."

There were a grand total of 15 different proposals awarded $100,000 in funding each for phase one of NASA's Innovative Advanced Concepts (NIAC). If the concepts like those above and below prove themselves feasible on a basic level in nine months' time, the $500,000 second phase could be next.

What're those? An unmanned pair of gliders that, when stacked, could work together to keep each other in Earth's atmosphere "for years" and do the same types of things as orbital satellites but for much cheaper, is one.

Next up is something maybe a bit more interesting. Inexpensive "robotic crawlers, hoppers and soccer-ball style buckey-bots" (wha?) that'd traipse around the forever-in-shadow areas on heavenly bodies, mapping and looking for water and nitrogen among other things. These have one of the cooler acronyms too: CRICKET -- short for Cryogenic Reservoir Inventory by Cost-Effective Kinetically Enhanced Technology.

It's worth noting that these projects are all pretty far from reality at the moment, but if they're viable they could represent a means of furthering our knowledge of the galaxy around us.

In this article: buckeybots, CRICKET, cryogenicreservoirinventorybycosteffectivekineticallyenhancedtec, Cryogenics, europa, NAICS, nasa, nasainnovativeadvancedconcepts, Robots, space, transportation
All products recommended by Engadget are selected by our editorial team, independent of our parent company. Some of our stories include affiliate links. If you buy something through one of these links, we may earn an affiliate commission.