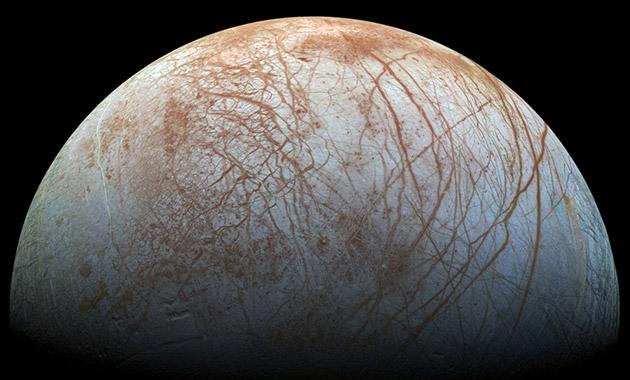 NASA's scientists have been conjuring up mission concepts to Europa for more than a decade, but now they're absolutely sure that the Clipper concept is the one. So, they're asking $30 million from the government for a year of preliminary studies starting on October 1st, on top of the $100 million the Congress already gave the agency to construct a viable Europa mission last year. "We believe we have now found the one that is just right," JPL senior research scientist Robert Pappalardo told Discovery News, where he also discussed more details about the agency's Goldilocks Europa project. We say "Goldilocks," because Pappalardo describes earlier concepts as too big, too small or too plain expensive.

The Clipper mission will be sending a spacecraft to do roughly 45 flybys over Europa's surface within three years, similar to what Cassini did to make a comprehensive map of Saturn's moon Titan. Since there's strong radiation on Europa courtesy of Jupiter's powerful magnetic fields, NASA plans to encase the spacecraft's "brain" with heavy shielding and to send it on a highly elliptical orbit that minimizes its contact with the gas giant's radiation belts. This spacecraft will likely be around the size of a school bus at 18-feet-tall, with two 29 x 4 feet solar panels on each side to harness power from the sun.

NASA aims to finish building the Clipper spacecraft in ten years, and if the Space Launch System is also ready by then, then it could carry the orbiter to Jupiter within three years' time. If it uses current rockets, it will take the unmanned vehicle up to eight years just to reach the planet. What exactly will the spacecraft do once it starts orbiting Europa? Well, since its mission is to study the Jovian moon's potential for habitability, it will get close to Europa and collect samples whenever available.

For instance, if the moon really does have geysers that shoot out water from beneath its icy shell into space, then the spacecraft will be able to grab airborne particles to analyze. It will also attempt to figure out what the satellite's red veins are made of, and whether they contain anything organic. NASA, by the bye, has been funding various technologies being tested in Antarctica for eventual use on Europa, such as that deep-sea robot that can reach depths of up to 6,500 feet. But Pappalardo didn't mention if the orbiter will carry machines capable of diving into Europa's subsurface oceans, or if those underwater robots are being developed for the second mission to Jupiter's moon.

In this article: europa, europaclipper, jupiter, nasa, space
All products recommended by Engadget are selected by our editorial team, independent of our parent company. Some of our stories include affiliate links. If you buy something through one of these links, we may earn an affiliate commission.