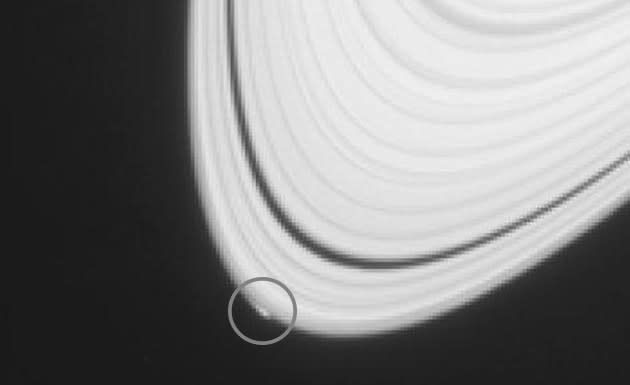 For the first and perhaps the last time ever, NASA's Cassini spacecraft, whose mission is to orbit Saturn, has captured a new moon emerge from the jovian planet's rings. As you might know, the birth of a moon is an extremely rare event, and in Saturn's case, it might never happen again. You see, there's a theory that the sixth planet from the sun used to have a much larger ring system, which led to formation of numerous natural satellites. After birthing a whopping 62 moons, though, the rings are now too depleted to make more, even if they still look lush from afar. This could be our very last chance to observe how Saturn's ring particles form a natural satellite that detaches from the planet and ultimately orbits around it.

Scientists estimate that the newborn, which they have named Peggy, is merely half a mile in diameter. That makes it positively tiny compared to the planet's largest moon, Titan, which has a diameter that measures 3,200 miles, or around half the size of Earth. In fact, it's so small that Cassini can't even take a decent picture of it, though NASA plans to observe it more closely when the spacecraft moves closer to the outer edge of the rings in 2016. Sadly, scientists believe Peggy won't grow any bigger and might be falling apart, so the little one might never get to become a legitimate Saturn satellite. In this article: cassini, moon, nasa, peggy, planet, saturn, space
All products recommended by Engadget are selected by our editorial team, independent of our parent company. Some of our stories include affiliate links. If you buy something through one of these links, we may earn an affiliate commission.