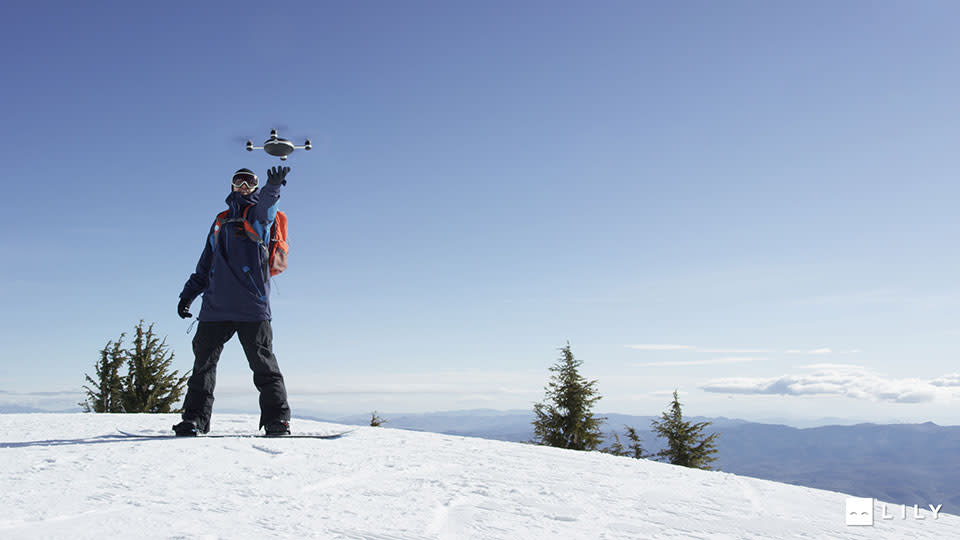 Aerial footage is a nice way to capture those action sports endeavors, and it's even better if you can fit the gear in your backpack. Lily ticks those boxes, and all you have to do to launch it is toss it up in the air. Once airborne, the camera UAV will follow you down the slopes or along the trail thanks to a tracking device that you wear on your wrist (or stuff in a pocket, we'd surmise). It's a similar setup to the Airdog we saw on Kickstarter last year. On board, the drone packs a camera capable of 12-megapixel stills, 1080p footage at 60 frames per second and 720p video at 120 fps. Those optics offer a 94-degree filed of view and the settings can be dialed in with a smartphone app. You can take the thing out on the water too, as the drone is waterproof and floats -- should it land in the rapids. The GPS tracker not only ensures the Lily stays close by, but it alerts the drone to elevation changes (like jumps). That circular gadget offers controls that launch the drone, snap a photo and tell it whether to fly in front, behind, to the side or circle you. It'll also position the UAV closer or further away to properly document the action. As you might expect, there's a waterproof case for the accessory, too. There's also a built-in microphone to capture every expletive you utter coming down the mountain. Lily won't ship until February 2016 as it's still in the prototype stage. If you're willing to put down some funds now, you can secure one for $499. When the drone arrives early next year, it'll be priced at $999.

In this article: actionsports, camera, cameras, drone, followdrone, gear, lily, outdoors, sports, timeline16droneself, TL17DRNFLW, uav
All products recommended by Engadget are selected by our editorial team, independent of our parent company. Some of our stories include affiliate links. If you buy something through one of these links, we may earn an affiliate commission.