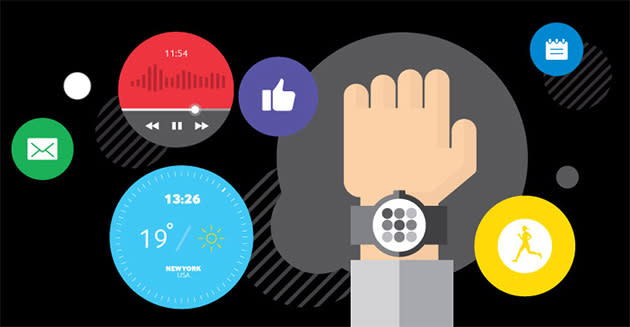 Samsung hasn't exactly been coy about its new Gear watch having a round screen -- it confirmed as much in an SDK announcement the day the Apple Watch launched -- but we're finally getting a better sense of what it brings to the table. The company released development tools for its new Gear watches to a small pool of early adopters today, and with it came a few details about the so-called "Project Orbis" (or Gear A, if you prefer) watch. Before we go any further, though, it's worth pointing out again that this particular Gear watch isn't going to run Android Wear. It's a Tizen device through and through, and what's been unearthed today corroborates plenty of stuff we've heard before.

A rotating bezel for selecting apps and options? That's a thing. Right off the cuff it seems like one of the more inspired interface decisions we've seen grace a smartwatch. Endless wrist-tapping gets old pretty quick, and even Android Wear's new scrolling gestures (which basically involve jerking your wrist around) seem more cumbersome than they really ought to. Meanwhile, a comparison chart included in the mix also seems to confirm the existence of two different round Gear models, one with built-in 3G for data use and phone calls, and another that has to stay tethered to a smartphone. So what's new here? Well, both the chassis and the crown (a.k.a. the nub button on the side) will be hewn of metal, and the circular screen sitting front-and-center should be 1.65 inches across. For those of you keeping score, that's about the largest round smartwatch screen you'll find out there, but since it runs at a resolution of 360x360, it's certainly not the most pixel dense.

The more we learn about Samsung's new Gear, the more it looks like it's been groomed to take on Apple and a generation of even more impressive Android Wear rivals. It might lose a little love because Tizen isn't everyone's cup of tea, but it at least it won't be alone in that respect -- LG's prepping a webOS-powered wrist-monstrosity of its own, after all.

In this article: gear, gear a, mobile, Project Orbis, samsung, smartwatch, tizen, watch, wearable
All products recommended by Engadget are selected by our editorial team, independent of our parent company. Some of our stories include affiliate links. If you buy something through one of these links, we may earn an affiliate commission.