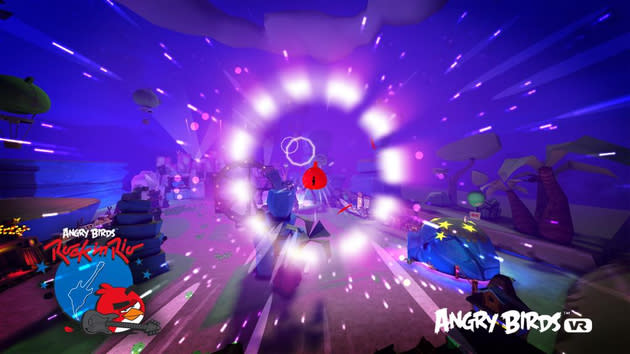 In case you felt T-shirts, the silver screen, lunch buckets, go-karts or your smart device weren't enough places to ogle Angry Birds, now there's one more: virtual reality. A demo for the ubiquitous game about an avian-fueled, porcine genocide made its way to Samsung's Gear VR recently, but from the sounds of it the formula's changed quite a bit. Because the series-typical 2D side-scrolling affair likely wouldn't translate well to a head-mounted display, the perspective's shifted to behind the birds. What's more, based on the screenshot above it looks like you're coasting through rings rather than destroying fortresses. As Road to VR suggests, one might guide the crestfallen fowl through these loops by moving your head. Seems plausible. There are still a number of questions remaining, but perhaps the biggest is how do the pigs feel about possibly getting spared this time out?

Hey @rovio Angry Birds VR Rock In Rio is here!!!! #angrybirds #FlockInRio We are so proud to be part of this! pic.twitter.com/JXc2Q98fAM

In this article: AngryBirds, angrybirdsvr, gaming, gearvr, hd, hdpostcross, ImangiStudios, imgnationstudios, Rovio, VirtualReality, vr
All products recommended by Engadget are selected by our editorial team, independent of our parent company. Some of our stories include affiliate links. If you buy something through one of these links, we may earn an affiliate commission.