Every ridiculous vehicle in 'Mad Max: Fury Road' is drivable 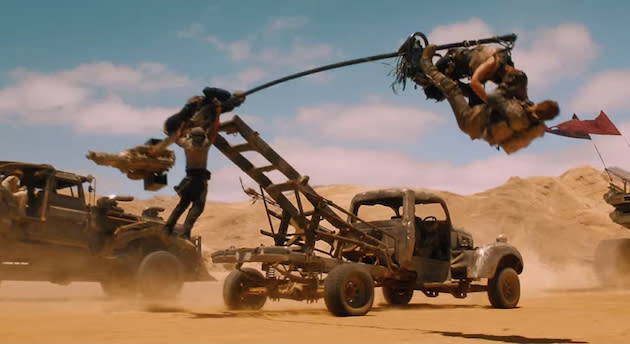 Practical effects have gotten incredibly scarce in big-budget summer blockbusters, so it's pretty refreshing to learn that every ride in Mad Max: Fury Road's apocalyptic menagerie isn't CGI -- they're all functional and drivable. Production designer Colin GIbson had strict marching orders from the movie's director ("make it cool or I'll kill you," according to Jalopnik) so he and his team scoured Australian scrapyards for donor vehicles. The 88 nightmarish results of that quest speak for themselves whether it's the Mopar-on-tank-treads "Peacemaker" or 600+ cubic-inch, dual V8 monstrosity with two '59 Cadillac Coupe de Ville bodies mounted on top of its chassis dubbed "Interceptor." The production team built some 150 vehicles and then beat the ever-living hell out of them. When all was said and done, "over half" were destroyed. How'd that happen? Catch the flick when it opens this weekend and find out.

In this article: colingibson, hd, hdpostcross, MadMax, MadMaxFuryRoad, movies, sfx, transportation, vfx, VisualEffects
All products recommended by Engadget are selected by our editorial team, independent of our parent company. Some of our stories include affiliate links. If you buy something through one of these links, we may earn an affiliate commission.