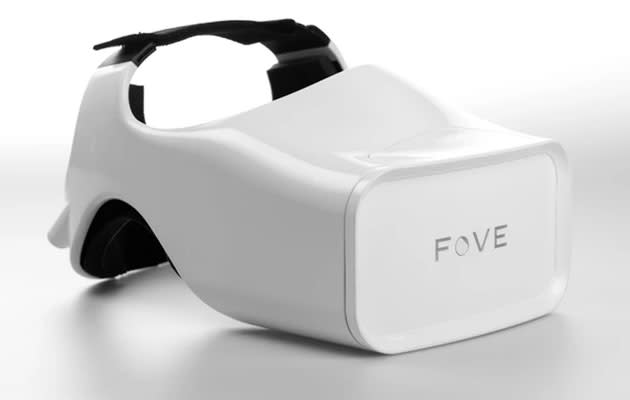 By the end of next year, there'll be so many virtual reality headsets in stores that you'll wonder if you even need a TV anymore. Fove is one such device and, unlike many of its rivals, offers built-in eye tracking that promises better depth of field, more natural movement and line-of-sight targeting in FPS games. The company is also boasting that the headset's ability to work out where you're looking will enable your PC to adjust its rendering resources accordingly. There's also talk that the Fove development kit will seamlessly work with titles published in Unity, Unreal Engine and CryEngine, so it won't be too difficult to adapt big-budget games to work with the hardware.

Fove also believes that its eye tracking VR headset has applications outside of just making games more immersive. In an early experiment, the outfit took its hardware to the University of Tskuba's Special Needs Education School for the Physically Challenged in Japan. There, a team of researchers wired the gear to a piano, enabling a disabled child to play at his school recital just by looking at the musical notes.

Spec-wise, users can delve into Fove to find a 5.8-inch 2,560 x 1,440 display, paired with eye-tracking sensors that boast accuracy down to 0.2 of a degree. If those flashy numbers are enough to get you interested, then you'll be excited to read that developer editions should arrive by May 2016. If you're an early bird to the company's Kickstarter, you'll be able to get in on the action for $349, while everyone will have to spend $399.

In this article: Crowdfunding, EyeTracking, FOVE, video, VirtualReality
All products recommended by Engadget are selected by our editorial team, independent of our parent company. Some of our stories include affiliate links. If you buy something through one of these links, we may earn an affiliate commission.