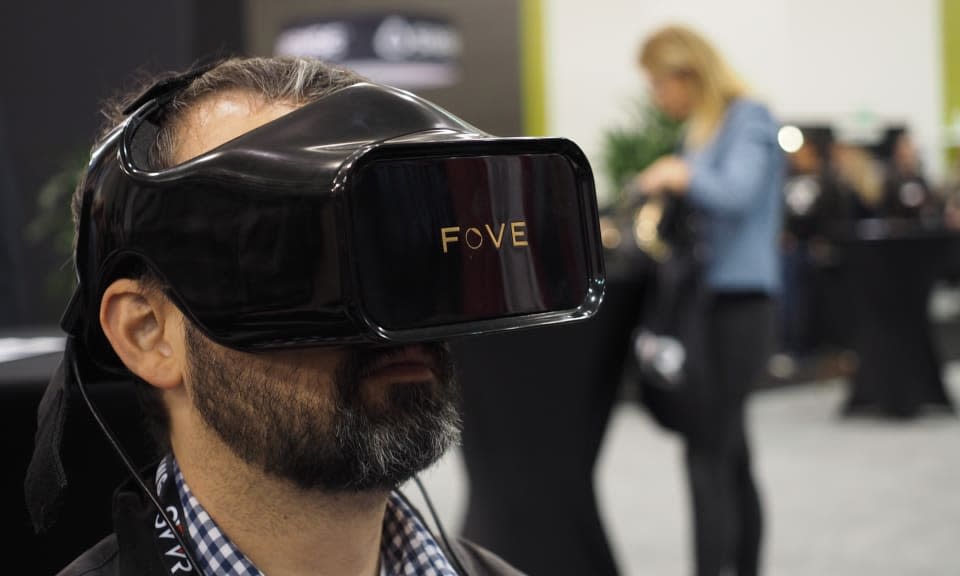 If you've shoved one VR headset on your face, you've pretty much shoved them all on your face. They all immerse you in a 3D world with a device that tracks your head movement so you can look around. The Fove, on the other hand, does more than just track your noggin; it also tracks your eyes and recreates how you see the real world while reducing strain on the system running the simulation. The company's slick Kickstarter video promises an impressive experience and even in its early stage, it delivers.

After an initial calibration that required me to follow and focus on a green dot, I was dropped into a game where I was tasked with shooting triangle-shaped objects from a spaceship. The first few moments of the game seemed like every other VR demo I've experienced. I did note that the graphics and latency are impressive for a $399 headset. Then I focused on an object sitting in the foreground (a radar ball sitting in the cockpit of the spacecraft) and realized that the depth of field had changed based upon my gaze. The game itself was nothing special, but the eye tracking had created a more realistic experience.

We don't see the world in the infinite focus that VR headsets (or video games in general for that matter) present. Instead, our eyes dart between objects in the foreground and background and our depth of field changes accordingly. While it takes a moment to register that the Fove is doing this, once I realized what was happening, I stopped playing and started staring. The eye tracking and refocusing wasn't instantaneous, but it was pretty close.

It does this by tracking your pupils. It's still in the early stages and there are still issues with it being fooled by mascara and eyeliner. The algorithm sees the dark area (usually your pupil) of the makeup and adjusts itself accordingly. Fove told Engadget that a future version of the algorithm will only look for things that are dark and round.

This future also has a one-year lead time before Kickstarter backers receive their Fove. Of course with all things crowdfunded, there's always a good chance that the ship date will slip and a larger, better-funded company could develop its own eye-tracking piece of hardware. But for now, Fove is looking good by watching where you're looking.

In this article: Fove, HandsOn, VirtualReality, VR
All products recommended by Engadget are selected by our editorial team, independent of our parent company. Some of our stories include affiliate links. If you buy something through one of these links, we may earn an affiliate commission.