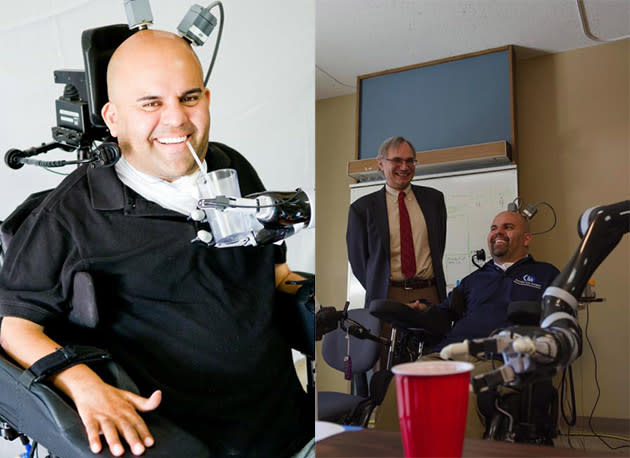 A paralyzed man named Erik Sorto has finally been able to drink beer on his own after 13 years, and it's all thanks to a robotic arm controlled solely by his mind. If you've been following our robotics coverage, you'll know it isn't the first mind-controlled robo limb -- a DARPA-funded project once allowed a woman to feed herself chocolate, while the one developed by the Braingate2 consortium helped another woman drink coffee on her own. This particular technology, however, works quite differently from the others. Its creators, a team of researchers from various institutes led by Caltech, implanted the neural chips needed to control the arm into a part of the brain called "posterior parietal cortex" or PPC.

Other mind-controlled robot limbs usually target the brain region that controls muscles, but the PPC is in charge of our "intent to move" instead. This apparently allows Caltech's creation to move more fluidly and naturally, unlike the movements of similar technologies, which are (according to the team) "delayed and jerky." In order to control the arm, Sorto has to think of what he intends to do, instead of imagining the details of a particular action. He has to think that he "wants to shake another person's hand," for instance, whereas other systems might require him to imagine each step: lift forearm, extend, grasp other person's hand, lift up, down, up, down.

Of course, it's a bit more complicated than that, and Sorto sometimes has to imagine bigger actions to perform simple tasks: To be able to bring the beer to his mouth, he has to visualize himself whirling his arms like a windmill. He also has to practice repeatedly (6,700 times just to be able to play rock, paper and scissors) to get movements down pat. The tech undeniably has huge potential to help patients gain back some of their independence, though -- we hope the team manages to refine it further for the sake of those who need it.

In this article: brainimplants, caltech, robotarm, RoboticArm, video
All products recommended by Engadget are selected by our editorial team, independent of our parent company. Some of our stories include affiliate links. If you buy something through one of these links, we may earn an affiliate commission.