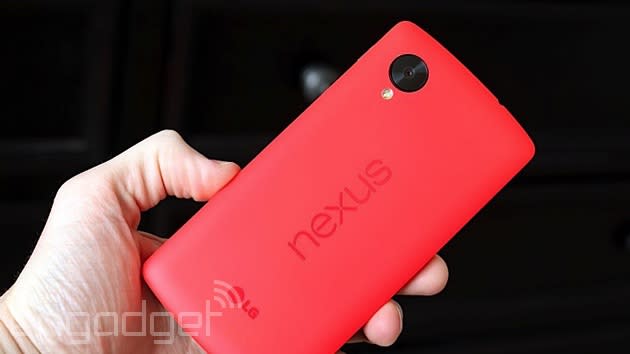 If you were disappointed that your only choice for a new, official Google phone last year was the gargantuan Nexus 6, you'll be glad to hear that 2015 could be very different. Android Police sources have elaborated on previous rumors with word that both LG and Huawei are working on Nexus handsets this year. The LG device, nicknamed Angler, would have a 5.2-inch screen and might borrow the G4's six-core Snapdragon 808 processor -- effectively, it'd be a modernized Nexus 5. Huawei's phone, Bullhead, would pack a bigger 5.7-inch display and could step up to a Snapdragon 810 chip. Think of it as a not-so-ungainly Nexus 6.

Some of the specs of both devices are up in the air, so it's not clear just how sophisticated they'll be. They should show up around the typical Nexus release window for October, however, which suggests that they'll both be poster children for Android M. Just don't expect a new tablet. AP's tipsters don't believe there's a revised Nexus slate in the works, which could leave the Nexus 9 soldiering on for another year.

In this article: android, androidm, angler, bullhead, google, googleio2015, huawei, io2015, lg, mobilepostcross, nexus, nexus5, nexus6, smartphone
All products recommended by Engadget are selected by our editorial team, independent of our parent company. Some of our stories include affiliate links. If you buy something through one of these links, we may earn an affiliate commission.