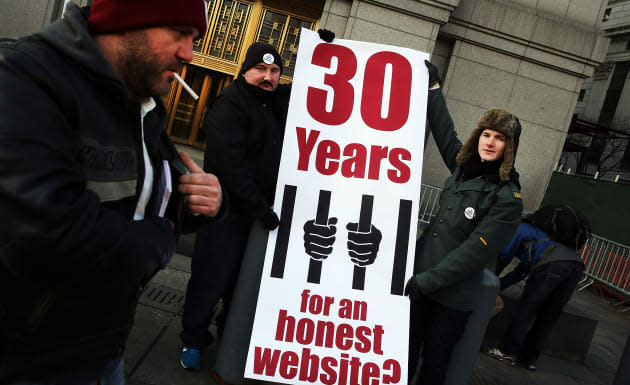 Silk Road founder Ross Ulbricht aka Dread Pirate Roberts will be an old man by the time he gets out of prison. The 31-year-old is already expected to serve a minimum of 20 years after being found guilty on seven charges, including money laundering and narcotics trafficking. But the United States Attorney for the Southern District of New York, Preet Bharara, is aiming to get an even lengthier sentence, one "substantially above the mandatory minimum." In a letter for New York Judge Katherine B. Forrest, Bharara's office wrote (emphasis ours):

Given the enormous quantities of drugs sold on Silk Road, in combination with other aggravating factors, Ulbricht's recommended sentence under the United States Sentencing Guidelines is life imprisonment, with a 20-year mandatory minimum due to his conviction for engaging in a continuing criminal enterprise in violation of Title 21, United States Code, Section 848. The Probation Office, too, recommends life imprisonment, finding "no factors that could overcome the severity of the instant offense." (PSR at 38). As set forth below, in light of the seriousness of the offense and the need for general deterrence, the Government believes that a lengthy sentence, one substantially above the mandatory minimum, is appropriate in this case.

The letter called him the "kingpin of a worldwide digital drug-trafficking enterprise" and revealed that when the feds seized his laptop, he had $18 million in his Bitcoin account from Silk Road commissions. It also brought up the accusations that Ulbricht hired a hitman in at least five instances, paying a total of $650,000 out of his Bitcoin wallet. It doesn't seem like anybody was actually killed, though, so authorities have yet to prove that he really paid up to get people murdered.

Ulbricht was arrested back in 2013, when feds seized Silk Road, an online marketplace for things you wouldn't find on eBay and Amazon that you could only access through the Tor browser. Due to its nature, it became a popular destination for drug and gun buyers and sellers, who did transactions primarily with Bitcoins. While it's true that Ulbricht only served as a middleman of sorts, the US attorney believes he should still be held responsible for making drugs easier to obtain and causing overdoses and addiction. "It does not matter that he did not personally handle those drugs," Bharara wrote, "neither would a traditional kingpin."

The defense, on the other hand, is trying to convince the judge to hand down a sentence "substantially below" the 20-year minimum. According to Ulbricht's lawyer, prosecutors couldn't tie Silk Road with any incident of overdosing and that dealing drugs on the website was far safer than dealing on the street. He also submitted 100 letters of support for his client, including one from the man himself. In it, Ulbricht said he now realizes his terrible mistake and asks the judge to "please leave [him his] old age." Judge Forrest will hand down his sentence on Friday, after which his lawyer will likely appeal the case, even though they were already denied a retrial in April.

In this article: DreadPirateRoberts, law, rossulbricht, silkroad
All products recommended by Engadget are selected by our editorial team, independent of our parent company. Some of our stories include affiliate links. If you buy something through one of these links, we may earn an affiliate commission.