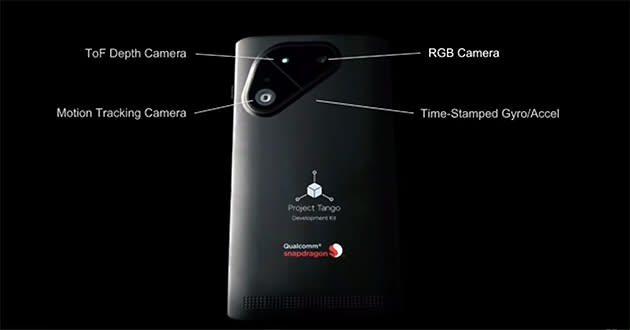 It seems like a decent of chunk of Google's big news today deals with its partnerships. The search giant is already teaming up with Levi's to explore the realm of smart Jacquard clothes, and now Google has confirmed that it's been working with Qualcomm to build its Project Tango world-sensing cameras into the chipmaker's reference phone designs. Those Tango-phones will be seeded developers and devices makers for now, and thanks to the arcane decisions that ultimately define a company's device-making strategy, we might not ever actually see a consumer-ready Tango phone. Still, Google's long-term ambitions are pretty clear: It'd like to get these Tango devices into our pockets en masse, and a closer relationship with one of the world's biggest mobile chipmakers is a great way to do it.

Before we go any further, yes, there are already Tango phones out there. Thing is, there seemed only to be a very small number of them, and they were earmarked specifically for developers who proved they had something cool to use them for. Now that Tango tech is winding up in a reference design -- a sort of pre-production working mockup of a phone -- the leap toward a Tango-ready consumer phone is almost trivial. That future is probably still aways off, though, so for now the company's settling for getting software creators more comfortable with Project Tango's quirks. Google announced yesterday that developers could buy Project Tango development kits for $512 starting next week, but there's one rub: Not everyone wants to carry around a 7-inch tablet with a trio of crazy cameras on its back. By squeezing down the size of those cameras and optimizing them to play nice with Qualcomm's crazy-popular Snapdragon chipsets, Google and Qualcomm have made Tango way more convenient for developers to play with (eventually) and opened up another route to bring Tango to the teeming masses.

Yes, another route. Last year, Google announced at another ATAP panel that it was working with LG to bring Tango to tech to consumers in early 2015 -- a launch window that's pretty clearly come and gone. A Tango smartphone in the works at the time reportedly got killed too, the thing is, we're in a pretty different place now. We now live in an age where your smartphone can double as a surprisingly decent VR headset thanks to a foldable hunk of cardboard and some lenses. Is it really such a stretch to think Google might want to build a way for us to capture content that can relatively easily be converted to VR with the very same devices? Not at all. The only question is when that intersection comes to pass, and with any luck, the answer is "very soon".

In this article: android, google, googleio2015, mobilepostcross, project tango, projecttango
All products recommended by Engadget are selected by our editorial team, independent of our parent company. Some of our stories include affiliate links. If you buy something through one of these links, we may earn an affiliate commission.