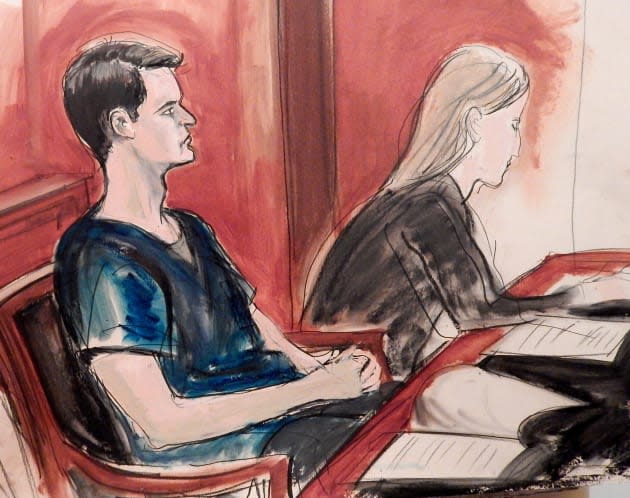 Ross Ulbricht is going away for life. The prosecution urged judge Katherine Forrest to send a strong message to anyone who might be tempted to go the Silk Road way, and she did. In addition to maximum time, the judge ordered $183 million, the estimated total sales from Silk Road, to be paid as restitution. When the 31-year-old mastermind was convicted on seven charges (including distributing narcotics over the internet, money laundering, engaging in a continuing criminal enterprise, and conspiracies related to those crimes) earlier this year, it was clear that he would spend a significant chunk of his life in prison. But over the past few weeks, his parents rallied support on social media and the defense made every attempt to highlight a different side of the drug market and its creator. They claimed Silk Road actually reduced harm, and that users were safer buying drugs through the site than on the streets.

They brought in declarations from a number of experts to validate that claim. "The site created a place where people who chose to purchase drugs could do so without the risk of street-based violence and reducing the risk of harm to the end user [with] quality control and accountability features," Tim Bingham, an Irish harm reduction researcher who filed a statement to support Ulbricht's defense told Engadget.

Based on the two years that he spent engaging with users on the site, he talks about a forum that was dedicated to people looking to reduce their drug use. "It was a very active thread," he says. "There were people supporting each other through the process. As opposed to other sites on the main web, people felt safer here." The site wasn't all about psychoactive substances. He points out that there were people with mental health issues looking for support in those forums. It was a place where they weren't stigmatized.

He believes the verdict is disproportionate, even unnecessary. "In the current environment of drug prohibition this sentence will not halt the continued growth of both the clear web and dark web online drugs markets," says Bingham. "If the sentence is intended to serve as a warning to others, I don't envisage it will have much of an effect." Instead of squashing potential drug markets, shutting down Silk Road has only made room for many others. He believes it's created a more fragmented landscape of illicit drug use. "We can see how many market places have sprung up since Silk Road," he says. "I would argue it's made it a lot harder from a research perspective. I think it's made it worse even for the law enforcement. Silk Road was purely drugs, a lot of these other sites are selling drugs and weapons – they're one-stop shops. They're introducing people to other areas of criminality that they may not have been involved in before."

As is the case with any crackdown on a drug racket, whether it's online or out on the streets, prosecutors tend to believe going after suppliers will put an end to drug use. "That's not a reasonable conclusion to make," says Stefanie Jones, nightlife community engagement manager at Drug Policy Alliance. "That decision is regrettable in the same way that all drug prosecutions are regrettable. They might be guilty of what they're charged with, but it's not going to have any impact on the overall human desire for substances that alter consciousness nor the market side of things where people will find ways to supply their substances."

The fact that the minimum mandatory sentence of 20 years would've been a sigh of relief for Ulbricht and his family is indicative of the magnitude of this case. But, life without the possibility of parole "is the worst possible outcome, not just for [him] personally, but also in the disdain for harm reduction shown by the prosecution and the judge," says Jones. "They are sharply out of step with all those who recognize exactly what it means to prioritize safety in an environment of drug prohibition. That's what Silk Road did to the extent that it was possible, and the Drug Policy Alliance will continue to support harm reduction wherever it arises."

In this article: darkweb, DrugMarket, HarmReduction, LifeInPrison, rossulbricht, SilkRoad, silkroadverdict
All products recommended by Engadget are selected by our editorial team, independent of our parent company. Some of our stories include affiliate links. If you buy something through one of these links, we may earn an affiliate commission.