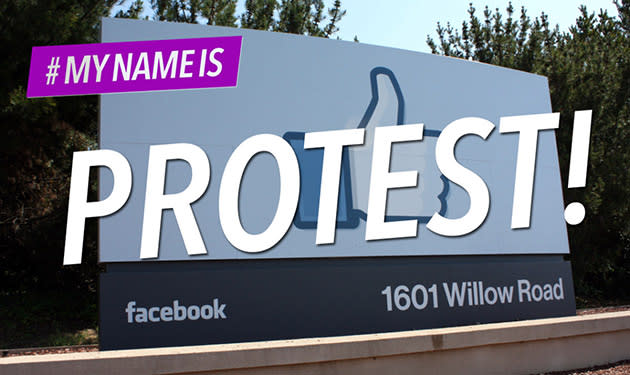 Drag queens, Native Americans, victims of abuse and anyone who'd rather not use their real names on social media aren't done waging war against Facebook's real name policy. Around 50 to 100 protesters have shown up at Facebook's Menlo Park headquarters on Monday for the #MyNameIs protest. They carried signs that read "My Name Is My Business," "Facebook exposed me to my abuser" and "Your apology was a lie," among many others. If you recall, someone with a vendetta against drag queens went on a reporting spree last year to get them all banned. People have been reporting Native American users, too, because their names tend to incorporate elements of nature, animals or their own features that make them sound fake. Blogger Dana Lone Hill was one of the people affected, as well as someone named Lance Browneyes from South Dakota.

The social network already apologized to the drag queen community, in particular, and clarified that the "authentic" names it requires don't necessarily have to be people's "legal" names -- so, yes, they can use their stage monikers. Problem is, according to the #MyNameIs organizers, a lot of people are still being targeted and reported for their "fake" names even now. They believe the "anonymous reporting process is heavily flawed" and is prone to abuse, so they're proposing three changes to Facebook's system.

First, they want Facebook to get rid of its fake name reporting option completely, since it already has separate tools to report impersonation and harassment anyway. Next, they want the social network to stop asking for government IDs, credit cards and the like to authenticate one's identity. Finally, they're asking the company to create an appeals process, as many affected users are having a hard time getting their accounts reinstated due to Facebook's almost non-existent customer service.

Facebook, on the other hand, has posted the latest updates to its authentic name policy on its Safety account. According to company execs Justin Osofsky and Monika Bickert, the social network now allows folks in the US (and later on, anywhere in the world) to access their accounts for seven days after they've been reported, while they take steps to prove their identities. They no longer have to show the social network legal docs, as well, and can use "a piece of mail, a magazine subscription, or a library card that include their authentic name."

The company has also tweaked its language throughout the site to clarify that authentic name doesn't necessarily mean legal name. In addition, Osofsky and Bickert have taken the chance to defend the company's policy, stating that it "helps protect [the] community from dangerous interactions, like when an abusive ex-boyfriend impersonates a friend to harass his ex-girlfriend, or a high school bully uses a fake name to post hateful comments about a gay classmate."

They haven't mentioned anything about Facebook's fake name reporting tool, however, which the protesters want to be removed. Chicago-based burlesque performer told The Huffington Post: "What Facebook has been incredibly slow to realize is that their name reporting system has been used as a tool of harassment and abuse, to frighten, endanger, and attempt to out thousands of people. I understand that people on Facebook sometimes pose as others, or hide behind pseudonyms to conduct abusive behavior online, but it is so important that we distinguish between those users and folks who are just being their authentic selves."

In this article: facebook, protest, SocialMedia, SocialNetworking
All products recommended by Engadget are selected by our editorial team, independent of our parent company. Some of our stories include affiliate links. If you buy something through one of these links, we may earn an affiliate commission.