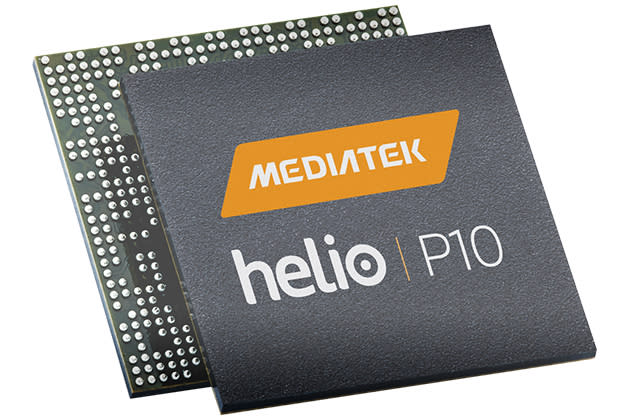 It's only been half a month since MediaTek announced a 10-core mobile processor, the Helio X20, as its flagship product for next year, but the company is already prepping a slightly lesser model to stay true to its roots. Meet the Helio P10, the first member of the "premium performance" family (while the X family is for "extreme performance"). For the CPU alone, this 28nm SoC sits somewhere in between the X10 -- the one that's inside the HTC One M9+ -- and the X20 as it has eight 64-bit Cortex-A53 cores that go up to 2GHz. It's obviously not a proper powerhouse given the lack of Cortex-A57 cores, but that should be good news for your device's battery.

Additionally, the P10 has a 700MHz dual-core 64-bit Mali-T860 for some decent graphics performance, as well as world mode LTE Cat 6 support for up to 300 Mbps down / 50 Mbps up speeds using carrier aggregation -- something that's missing on the X10. That said, while Qualcomm is still in the lead in this space, LTE Cat 4 (150 Mbps down / 50 Mbps up) on the X10 is arguably sufficient for most people.

Another goodie on the P10 is the integrated TrueBright ISP engine with support for "ultra-sensitive" RWWB optical sensors, which is apparently a world first. According to MediaTek, RWWB is the way to go as it claims to "capture twice as much light as traditional RGB sensors," as well as delivering color resolution that's even better than its RGBW counterparts. We'll believe it when we see it.

On the audio side of things, the P10 comes with HiFi audio performance rated at 110dB SNR and -95dB THD, thus saving device makers the trouble of adding a dedicated audio chip. Last but not least, MediaTek's MiraVision 2.0 enables butter-smooth 60 fps full HD display, along with an "UltraDimming" mode for late night reading and "BluLight Defender" mode to reduce eye fatigue (and it's apparently more efficient than third-party apps that offer the same functionality).

As to when us mere mortals can get our hands on the Helio P10, MediaTek says it'll be shipping the chip in Q3 this year, and the first consumer devices may arrive in the later part of 2015 -- a little before the X20 makes its debut in the market.

In this article: chip, computex2015, helio p10, heliop10, Mali-T860, mediatek, mobilepostcross, octa-core, p10, processor, soc
All products recommended by Engadget are selected by our editorial team, independent of our parent company. Some of our stories include affiliate links. If you buy something through one of these links, we may earn an affiliate commission.