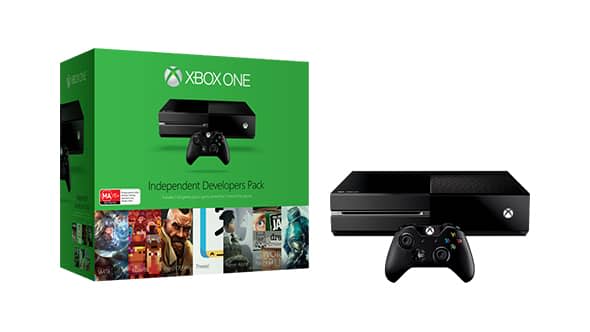 It's not E3 yet, but Microsoft has taken the wraps off of this limited edition "Independent Developers Pack" Xbox One, in Australia of all places. Besides packing download tokens for five ID@Xbox (Hand of Fate, Threes!, #IDARB, The Jackbox Party Pack, and Never Alone) and DLC add-ons for two others (Warframe, Smite beta) it also has the new Xbox One controller with integrated headphone jack that we've been expecting. In Australia, the bundle is priced the same as any other Kinectless XB1 pack, at $499AU. There's no word on a launch for the US or anywhere else, but with the big gaming conference just a couple of weeks away, we should hear more soon.

Update: It looks like Microsoft removed the reference to a new controller from its store page, but we have a picture of the listing as it originally appeared after the break. That detail may not have been intended to leak this early, but we'll check to see if there's any other information.

Update 2: Microsoft responded to our inquiry, simply saying "As with many products, bundle offers vary from country to country. We have nothing new to share at this time." We suspect "this time" will mean something different once E3 starts -- see you then.

In this article: controller, e32015, hdpostcross, id@xbox, microsoft, specialedition, XboxOne
All products recommended by Engadget are selected by our editorial team, independent of our parent company. Some of our stories include affiliate links. If you buy something through one of these links, we may earn an affiliate commission.