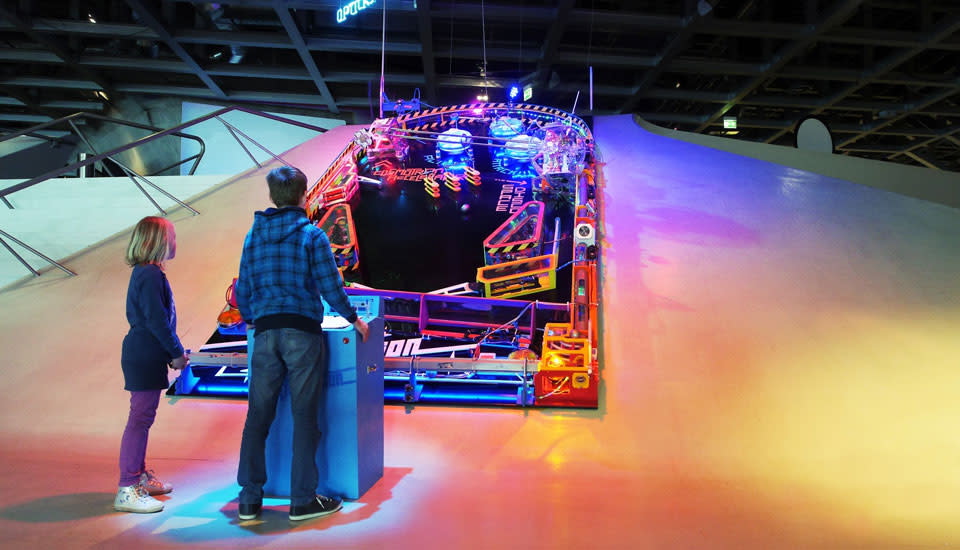 If you're in Wolfsburg in the near future, you could do a lot worse than to head over to the Phaeno museum, which is currently playing host to one enormous pinball machine. The outfit teamed up with the Pacific Pinball Museum for an exhibit on the game. At the same time, they commissioned artist and maker Niklas Roy to build a customized machine that would comfortably sit on one of the center's famously steep walls. The result is Galactic Dimension, a pinball machine with a playing surface that's nearly 10 x 20 feet.

Realizing that the project was too big for solenoid-powered flippers, Roy developed a large-scale hydraulic system to propel his balls. After that, the creator decided to use as many household objects in the design as he could, with the plunger being formed out of a sewer pipe and a hair cryer. Look closely and you'll see that even the bumpers were crafted from the sort of desk fans you'd find in an office. Since the walls are mounted at 30 degrees, installation was a bit problematic, requiring Roy to dangle from a body harness just to screw and assemble the various self-contained components. The exhibition is running from now until the end of September, and it's probably worth checking out.

In this article: GalacticDimension, Giant, NiklasRoy, Pinball, video
All products recommended by Engadget are selected by our editorial team, independent of our parent company. Some of our stories include affiliate links. If you buy something through one of these links, we may earn an affiliate commission.