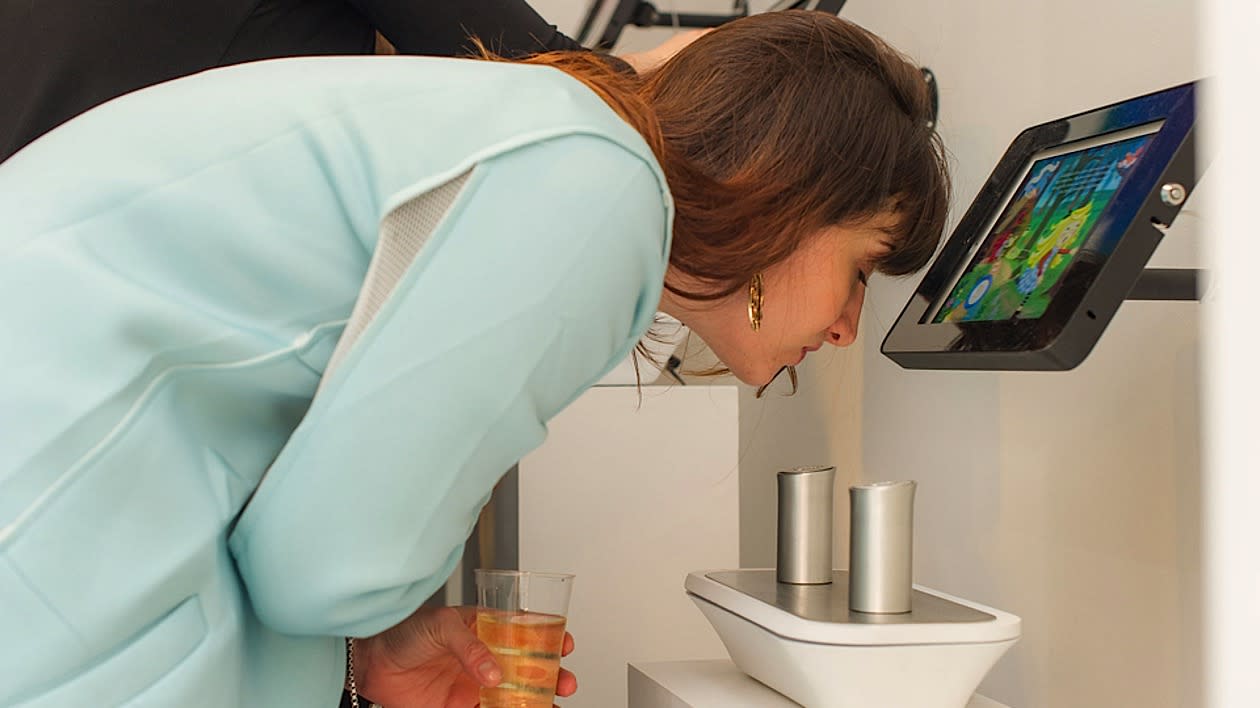 Once upon a time, on a warm afternoon in May, I followed Goldilocks on her adventure, one smell at a time. As she made her way through the illustrated forest on the iPad in front of me, I tapped the screen and leaned over a small cylinder for a whiff of the woods. A few seconds and a whirring sound later, the smell of pines, faint but fresh, brought the classic children's book to life. A lush green, mossy forest instantly popped into my head. And as the subtle smell started to wear off, so too did my skepticism toward olfactory technology. Or so I thought.

For my next scent rush, I quickly moved on to the smell of lemon taffy that was laid out on a bear's bed and hovered over the second machine for a fruity whiff. But when I did, a potent shot of citrus made me nauseous instantly. I figured the smell of freshly brewed beans from a cup of coffee in the bear's cottage would take away the uneasiness. This time, though, the device diffused an unrecognizable scent that felt completely artificial. Another pang of nausea kicked in, leaving me queasy and off coffee for the rest of the day. Goldilocks and the Three Bears: The Smelly Version works with an oPhone to emit story-specific scents.

I inhaled all of this at the Museum of the Moving Image in Queens, New York, where the smelly version of Goldilocks and the Three Bears has been rewritten with tap-to-smell instructions for Sensory Stories, an exhibition of interactive narratives. In a space that's dotted with virtual reality headsets and motion sensors, iPads that display a children's book look almost obsolete. But with each screen hooked up to an oPhone, a silver boat-shaped olfactory device with a couple of protruding cylinders that emit digitized scents, the illustrations turn into an oBook, one that creates smells on demand in an attempt to make reading more immersive.

"[Scent] touches on things we're not even conscious of. It's like a soundtrack with dramatic music," says Melcher.

"Immersion," if you haven't noticed, has been the media buzzword as of late, with virtual reality and lifelike 3D audio slowly becoming requisite tools for storytelling. While those two senses are being hacked one headset at a time, the exploration of olfaction (or the sense of smell) seems like a natural, even necessary, progression. "[It] taps into something that's very primal," says Charlie Melcher, founder of Future of StoryTelling and the curator of the exhibition. "It touches on things we're not even conscious of. It's like a soundtrack with dramatic music. We're so in the movie that we don't think about the music, but we feel it and it changes the way we experience the story. Olfactory [technology] can work the same way."

Smells are evocative. Imagine sending a text that's loaded with a scent to remind someone of a specific moment, or reading a book that's laced with smells or even sending scent notes perfectly paired with music tracks. "We want to create a basis of communication through scent," says David Edwards, professor at Harvard University and co-founder of Vapor Communications, the company that invented oPhones. "That's really what our noses are made for. If we walk through a neighborhood, the scent story comes through. It's a secondary signal, but it's critical to what we think. It's how we sense the world." The Sensory Stories exhibit at the Museum of the Moving Image in Queens, New York

Scientists and developers have made headway with visual and aural technologies that can replicate our natural world, but olfactory technology is still nascent. It's largely restricted to research labs because it's hard to pin down the ways in which the sense of smell works. Unlike the eyes, which primarily rely on three receptors -- red, green and blue -- the nose has about 800 to 900 receptors, which makes it possible to smell that many odors, but it complicates the process of detecting and recreating smells with precision. It takes a highly trained human nose (or a super-advanced electronic nose) and sometimes several thousand molecules to get it right.

Even when it's done right, it can be incredibly hard to quantify smell. Scent molecules move a lot slower than light or sound waves. And even when they're on the move, they tend to lose their vigor along the way. On the flip side, when they latch onto the surfaces they come in contact with, they can linger on for days. So you can smell like a restaurant long after you've walked away from it. But one of the lesser-known facts about smells is how stubborn they can be. They often bind with the receptors in the nose and don't budge for a while. So a single scent changes the experience of the smells that follow. "You and I perceive scent differently over the course of a day, a week and a lifetime," says Edwards. "There's a variation in our abilities. It's fascinating when it comes to science, but it's confounding when it comes to telling a story with scent."

Now every time I think of a strong citrus smell, the sight of a little, golden-haired girl follows a pang of uneasiness.

Despite those challenges, and sometimes because of them, smells create strong feelings -- good, bad or the queasy kind. But it's hard to gauge what that reaction is going to be because everyone has a different association with a smell. As such, the investigation of olfaction feels like an exploration of human emotions. "Many people have the misconception that encountering smell generates a particular memory," says Christopher Brosius, a master perfumer and founder of bespoke scent studio CB I Hate Perfume in Brooklyn. "That's not entirely accurate. What it does is, [it] registers a particular emotional experience and the power and profundity of that experience causes the memory to be generated." When these smell-related feelings are recalled in an instant, it gets even trickier for the technology of smell. Now every time I think of a strong citrus smell, the sight of a little, golden-haired girl follows a pang of uneasiness.

Even though I now associate Goldilocks with the museum, smelling a book isn't a new concept. Over the last century there's been a smattering of similar scent experiments, especially accompanying movies. In 1960, Hans Laube devised Smell-O-Vision, a system that pumped scents to individual seats in a movie theatre for a screening of Scent of Mystery. Even though it was a revolutionary idea that introduced the concept of personal olfactory experiences, it was slammed for its syntheticity. It left the audience overwhelmed with a messy overlapping of scents that was hard to shake off. A couple of decades later, John Waters revisited that idea with Odorama. He created scratch-and-sniff cards so the audience could smell moments in his satirical film, Polyester.

The invention of the oPhone eliminates some of that scent messiness. The device works with an oChip, a small, disposable cartridge that contains a dry scent compound. When the machine gets the signal, the oChip twists and a waft of air delivers the scent in the close proximity of the user's nose through the five holes along the axis of the cylinder. According to Edwards, the short scent note creates limited exposure to a fragrance so as to not overpower the nose. And since it deposits only a negligible amount of molecules in a person's body, it rules out allergic reactions. So far, Edwards says no breakouts have been reported.

"In terms of a machine being able to recreate any possible scent at will, we're a long way from being able to do that," says Brosius.

Olfactory technology has come a long way since its historical experiments, but the inability to detect and predict the behavior of scent molecules continues to haunt its present. "In terms of a machine being able to recreate any possible scent at will, we're a long way from being able to do that," says Brosius. For creating a particular scent, a machine needs to house several thousand individual molecules and be able to combine them on the fly. "If you think about what a pain in the ass it might be to change the ink cartridge on a color printer, think about changing cartridges when you're looking at say 4,000 molecules," he says. "Unfortunately without that range of individual molecules you are never going to be able to capture anything other than simplistic, often unrecognizable scent."

Brosius, who has recreated precise smells like fresh laundry, waffles and old books in a library, likens scent-making to art. He believes the success of an olfactory experience depends on aesthetics and the precision of the compound. "Oftentimes, when technicians or simple perfumers are creating scents, they fall back on thinking they can use three chemicals to create the smell of chocolate," he says. "Yes, that can be done, but it smells like cheap chocolate." Based on headspace technology, which is used across labs for scent analysis, chocolate emits somewhere between 1,000 and 1,200 molecules. "Humans will always rely on technology and think it's better than what the brain can come up [with]," he says. "In many respects, it's not. In terms of olfaction, it's very useful, but to think it can do more than we can? Nope, not at all."

"We're interested in an iTunes of aroma that will allow you to create, store and share scent experiences," says Edwards.

Olfactory technologies have the same challenges and ambitions that were once associated with virtual reality: the nausea, the disbelief and the confounding science. But even though Goldilocks and her smelly adventure overwhelmed my olfactory organs and laid bare the flaws of the technology, it also revealed its potential to change the way ideas are expressed and exchanged.

"We're interested in an iTunes of aroma that will allow you to create, store and share scent experiences," says Edwards. "Ultimately, you could curate your scent space in the way that you design your sound space. You can find a scent vocabulary that speaks to you. That's where we're going; we're heading in a personal direction."

[Image credits: Thanassi Karageorgiou, Museum of the Moving Image (museum images); Melcher Media (Goldilocks illustration); Odorama-geruchskarte, Gmhofmann (Odorama)]
In this article: goldilocks, GoldilocksAndTheThreeBears, johnwaters, MuseumOfTheMovingImage, odorama, olfactorytechnology, ophone, sensorystories, uk-feature
All products recommended by Engadget are selected by our editorial team, independent of our parent company. Some of our stories include affiliate links. If you buy something through one of these links, we may earn an affiliate commission.