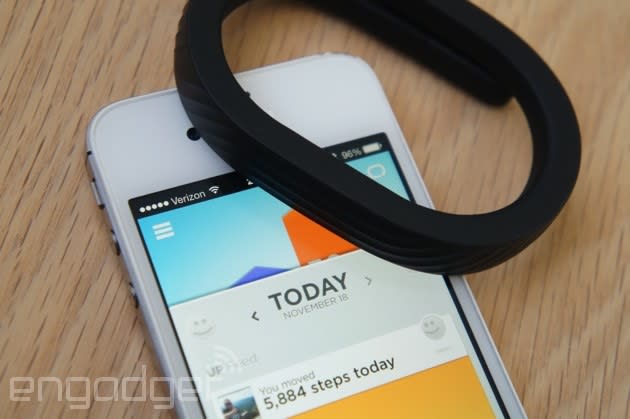 Wireless electricity transmission sounds... dangerous, but the ability to do it could transform the internet of things. Researchers from the University of Washington have charged a JawBone UP24 fitness tracker with nothing but ordinary WiFi. They noticed that regular, ambient WiFi was strong enough to power a variety of tiny devices, but only in micro-bursts. So, they inserted "noise" into the signals to keep the power levels steady without disrupting data transmission. Using the technique, which they dubbed "PoWi-Fi" (we vote for just "Pow-Fi") they ran a low-power surveillance camera and temperature sensor from up to 6 meters (20 feet) away from the WiFi antenna.

Not content with that, the team ratcheted up the experiments. They found that by adding a rechargeable battery, the same camera could be powered from up to 7 meters (23 feet) away, even through a brick wall. They then tested the setup in six homes and found that the modified routers had no impact on data rates in the real world. Finally, they charged a Jawbone UP24 sports tracker via PoWi-Fi to 41 percent in just two-and-a-half hours.

It's still early days, and more tests need to be done. But if you've ever changed the battery in a wireless remote camera or climate sensor, you might be able to smell the potential. If you could power those devices from a regular WiFi router instead, it could transform the internet of things into much cheaper and more usable idea.

In this article: Jawbone Up24, PoWi-Fi, research, University of Washington, WiFi, wireless charging, Wireless power
All products recommended by Engadget are selected by our editorial team, independent of our parent company. Some of our stories include affiliate links. If you buy something through one of these links, we may earn an affiliate commission.