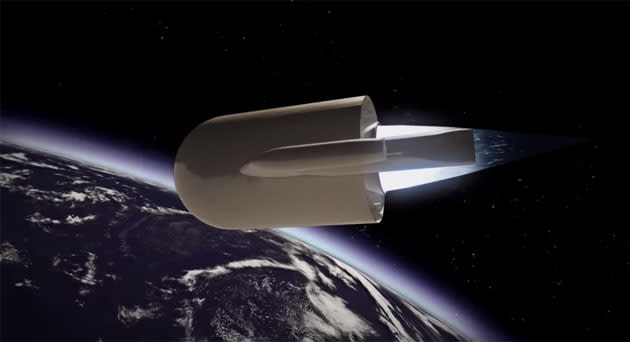 Airbus isn't done trying to beat SpaceX... in fact, it's going for the jugular. The German aerospace firm has unveiled Adeline, a reusable first-stage rocket engine that aims to one-up the efforts from its American rival. Rather than try to return the entire first stage to Earth, Adeline carries just the most expensive bits, the engine and avionics. The machine has an aerodynamic shield that reduces engine stress on the way down, and two winglets with rotary motors to guide the craft safely to the ground -- Airbus envisions the rocket segment landing on runways, not launchpads. This approach reportedly requires much less fuel than SpaceX's approach, and would lop as much as 30 percent off routine launch costs.

Not that Elon Musk and company are worried about this upstart, at least not in the short term. Adeline only exists as a scale prototype right now, and it isn't expected to launch until 2025 even if it gets the necessary financial backing. If it pans out, though, it could help usher in an era of cheaper spaceflight where key components are rarely thrown away.

In this article: adeline, advancedexpendablelauncher, airbus, airbusdefenceandspace, ariane, reusablerocket, rocket, space, spacex, video
All products recommended by Engadget are selected by our editorial team, independent of our parent company. Some of our stories include affiliate links. If you buy something through one of these links, we may earn an affiliate commission.