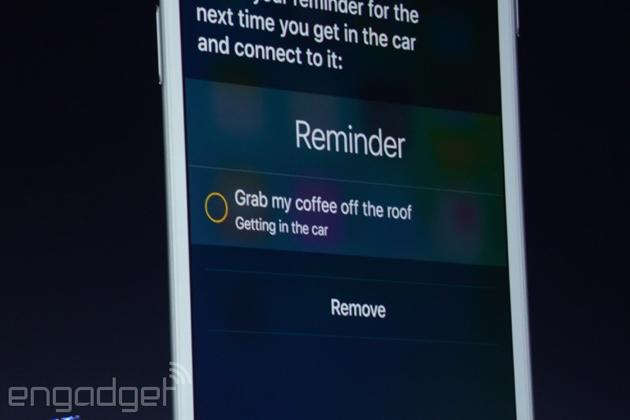 No, it's not the Rodan + Fields, Katy Perry-backed acne solution. At today's Worldwide Developers Conference in San Francisco, Craig Federighi, Apple's SVP of Software Engineering, revealed a new "proactive" Siri, one with an overhauled UI and a feature set on iOS 9 that makes it Apple's take on preemptive search. With this new Siri, users can expect both a 40 percent reduction in word error rates for spoken commands and faster research results. It'll also surface user photos from their libraries with a simple voice command and even set "intelligent" reminders based on context-specific actions.

Federighi highlighted a few scenarios where Siri's new context-based intelligence should come in handy. Say, for example, you're viewing an incoming text from a friend (or boss, as in the onstage demo) that asks you to pick something up; you can easily say "Remind me about this later today." And Siri will, even adding that reminder straight to the calendar. Siri can now also pick up your iOS habits where you left off. So if you were listening to an audiobook, but then happen to connect your iPhone to the car, that audiobook will automatically surface. Or if you connect headphones to your iPhone, your Now Playing screen from iTunes will pop up.

Perhaps the most Google Now-like aspect of this new Siri is its ability to be always aware of your iOS activity. Now, invites received via email can be added direct to the calendar. But that's not all: If users swipe right on the home screen, a Siri Suggestions page will appear giving them time to leave reminders, nearby points of interest, traffic conditions and, yes, driving directions.

Federighi said this new, more intelligent Siri's made possible by Apple's API for search, which lets it deep dive into a user's apps for relevant suggestions. Not to worry, though, as Apple's doing all this with a heavy emphasis on privacy. According to Federighi, all of this proactivity within Siri is free from identifiers. That means it's not linked to a user's Apple ID or other Apple services, and isn't shared with third parties. All of that preemptive search is done on the device, granting users the anonymity required for this high-level digital assistant.

In this article: apple, apple siri, applesiri, google, googlenow, ios, ios9, mobilepostcross, siri, siri intelligence, siriintelligence, wwdc, wwdc2015
All products recommended by Engadget are selected by our editorial team, independent of our parent company. Some of our stories include affiliate links. If you buy something through one of these links, we may earn an affiliate commission.