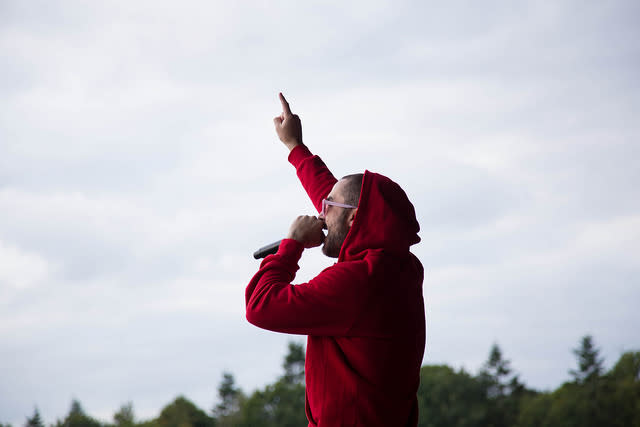 When Radio 1 DJ Zane Lowe announced he was leaving the BBC to join Apple, it was clear that he'd been lured away from the bright lights of London to help launch a new music platform. The logical assumption was that he'd help create curated playlists for a service formed from the acquisition of Beats Music, but as it turns out, he's sticking with what he knows: radio. At its annual developer conference, Apple unveiled a new service called Beats 1, its first ever-live radio station. It'll broadcast music 24/7 to over 100 countries from June 30th, with Zane Lowe fronting the show in Los Angeles, Ebro Darden in New York and Julie Adenuga in London. All for free.

Sure, Lowe is sharing the spotlight with two other DJs, but make no mistake, he is Beats 1's top dog. Apple describes him as the "world's foremost authority on emerging music" and he also detailed how the new radio service would operate during Apple's keynote. It makes sense: In the 12 years Lowe spent at Radio 1, he gained exclusive interviews with Jay-Z, Kanye West, Eminem and music producer Rick Rubin. He's also credited with helping to bring acts like the Arctic Monkeys, Adele and Ed Sheeran into the public eye. Apple will hope he can do the same while heading up Beats 1, but influence many more listeners in the process.

Beats 1 comes as part of Apple Music, but won't be put behind a subscription paywall. It means that iOS and Android device owners the world over will be introduced to Lowe for the first time (for better or worse, depending on your opinion of him), giving him, and his co-hosts, the chance to share exclusive music from big name artists, but also acquaint people with up-and-coming acts representing all genres. In the UK at least, Radio 1 fans still mourning Lowe's departure will have the chance to reconnect with him, for others it's a complementary chance to learn about what's new in the world of music.

In this article: apple, apple music, beats one, mobilepostcross, music, wwdc, wwdc2015, zane lowe
All products recommended by Engadget are selected by our editorial team, independent of our parent company. Some of our stories include affiliate links. If you buy something through one of these links, we may earn an affiliate commission.