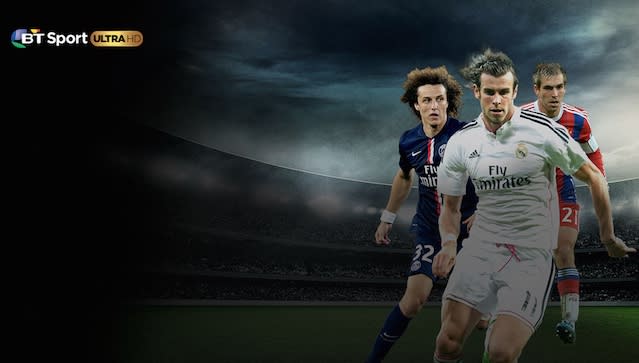 While BT will begin charging Sky subscribers for access to Champions League football next season, the company may soon ask for more money from existing customers too. It's for a good reason, though: the company has said it will launch the first 4K channel in Europe in August, called BT Sport Ultra HD, delivering selected matches from the Premier League, FA Cup, Champions League and Aviva Premiership Rugby. As you'd expect, these broadcasts won't work on BT's existing hardware, so it'll introduce a new BT TV Ultra HD set-top box to do the heavy lifting.

Details are scarce but we do know that it'll be BT's "best ever" Youview+ box and is capable of storing up to 600 SD hours or up to 250 HD hours on its 1TB hard drive. In February, reports suggested that the broadcaster had brought forward the launch of its new box in order to steal a march on Sky. It's believed that it could also share streams to smartphones and tablets, like EE TV, and let users access recordings while on the move. BT also says that Ultra HD content will only be available to BT Infinity subscribers.

With BT soon to push 4K content, you can expect that Sky won't be too far behind. It too is said to be readying a new internet-connected 4K set-top box, but has yet to confirm plans. If you already own a 4K TV and intend to jump on BT's new hardware, the Community Shield will be the first match to be shown in Ultra HD when it kicks off in August.

In this article: 4k, bt, bt sport, champions league, football, hdpostcross, sky, uk-feature, ultra hd
All products recommended by Engadget are selected by our editorial team, independent of our parent company. Some of our stories include affiliate links. If you buy something through one of these links, we may earn an affiliate commission.