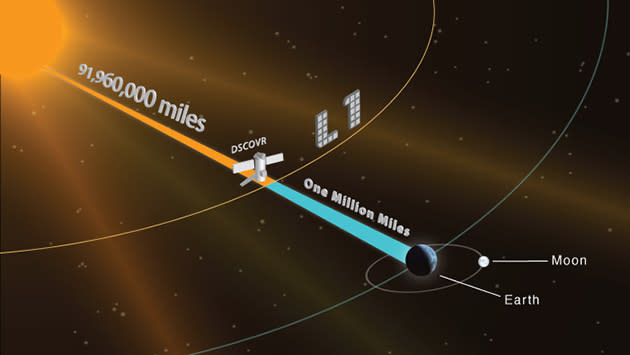 NOAA's Deep Space Climate Observatory (DSCOVR) almost become a very expensive piece of junk. It spent over a decade in storage until the Air Force injected the project with $35 million in much-needed funding. Now, the satellite has finally made it to its destination more than 100 days after SpaceX's Falcon 9 ferried it beyond our atmosphere during its first ever deep space flight. DSCOVR is now in its final orbit: a place called Lagrange point 1 (L1), located a million miles away from our planet or around four times farther than the moon. That position gives the satellite a clear view of both the sun and the Earth, allowing its instruments to effectively monitor solar winds, as well as measure ozone amounts and the planet's radiation budget.

According to one of NOAA's assistant administrators, Stephen Volz, the satellite "will trigger early warnings whenever it detects a surge of energy that could cause a geomagnetic storm," which could, in turn, cause telecommunication, GPS and aviation issues, as well as power disruptions. The data it'll send back will give the agency the power to predict storms' magnitudes per region, with help from a new forecast system. DSCOVR "will soon be ready to begin its mission," project manager Al Vernacchio said, but NOAA first has to check whether all of its instruments are in working order. Once it's switched on, NASA said it will be officially known as the "first operational space weather satellite in deep space."

In this article: dscovr, nasa, noaa, space
All products recommended by Engadget are selected by our editorial team, independent of our parent company. Some of our stories include affiliate links. If you buy something through one of these links, we may earn an affiliate commission.