Hear me out: The case for Le Creuset's Star Wars cookware

MIT is turning AI into a pizza chef 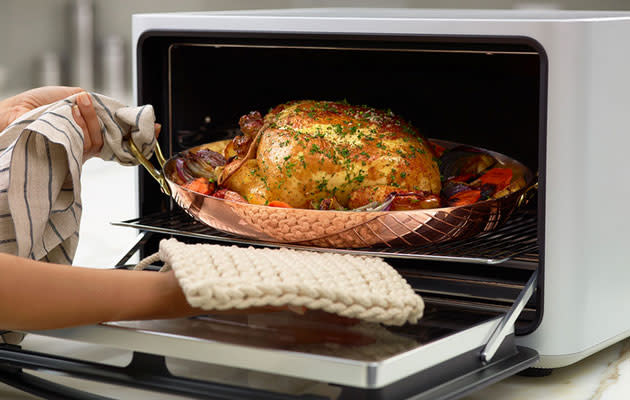 It may look like the toaster oven that you fed yourself with that time you were on the lam and hiding in a seedy motel, but this could be the future of cooking. Meet June, a tabletop oven that combines cutting-edge heating elements, clever sensors and smartphone technology to build "the computer... that cooks." Technology-wise, there's an NVIDIA Tegra K1 chip with a 2.3GHz quad-core processor paired with a 5-inch touchscreen and a "full HD" camera that's been embedded in the ceiling. You guessed it: the camera is for posting pictures of your culinary concoctions to Instagram.

Actually, that's a lie, because the camera is also used by the device to try and identify the food you're preparing to cook. Paired with a weight-sensing roof (you balance the food on top before you load it in), it's hoped that it won't be long before June will work out food you're about to nuke and calculate a cooking time based on its weight. If, like me, you're always overcooking meat to avoid food poisoning, you can hook up the built-in temperature probe for an unprecedented level of precision. If it needs to, the device will actually variate the temperature without you having to set an alarm and sprint into the kitchen when the recipe says turn the heat down after the first 30 minutes.

The secret to June's on-paper success is in its heating elements, which are made of carbon fiber and are promised to reach maximum power in five seconds. Pre-heating the unit to temperatures of 350 degrees Fahrenheit is slated to take just over four minutes, far faster than that lumbering device sitting in your kitchen. Another benefit of the ceiling-mounted camera is that you can watch your food cooking on your smartphone, saving the bother of opening the front door and wasting all of that heat.

So, you're sold on one, right? Before you open your mouth to utter the immortal "shut up and take my money," you should be warned that this costs a pretty penny. If you pre-order before July 10th and stump up a $95 deposit, then you'll be able to grab this device for $1,495. Yes, that's the price of a decent stove at Home Depot, but if you don't pre-order before then, the markup rockets to $2,995. That said, if this technology is proven to work and the second-generation version comes in a stove format, we'd certainly think about making the splash. Still, that probably works out to a cheaper dollar-per-meal rate than something like the Rotimatic, right?

In this article: Baking, CarbonFiber, Cooking, Food, June, Oven, Roasting, Smart, ToasterOven, video
All products recommended by Engadget are selected by our editorial team, independent of our parent company. Some of our stories include affiliate links. If you buy something through one of these links, we may earn an affiliate commission.