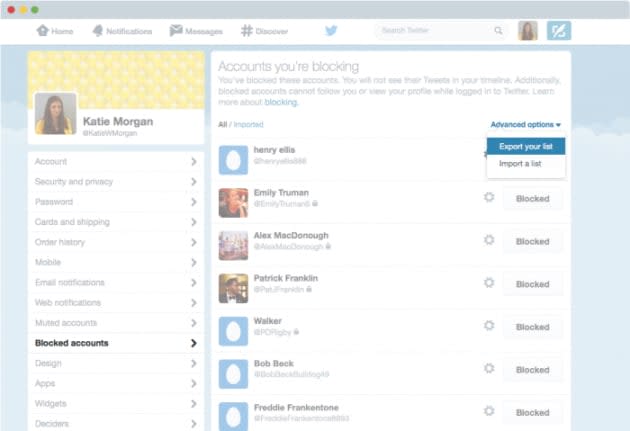 Anyone can use Twitter which makes it equal parts amazing and horrible for some users. To help squelch some of the more annoying voices on the social network, Twitter lets users block accounts they find disruptive or worse, threaten said user. Today, Twitter announced that a user's list of blocked accounts can now be exported and shared with other users. The list can then be imported by other Twitter users to mass block accounts. This is helpful for groups that have been the target of abuse and general trolling. Twitter has come under fire by groups saying the company doesn't do enough to protect its users from abusive accounts. It's a sentiment that's shared inside the company. In a leaked internal email, CEO Dick Costolo said, "we suck with dealing at trolls on the platform and we've sucked at it for years." With today's news, Twitter says it's also working on additional user controls and will share more information in the future.

In this article: Safety, security, Twitter
All products recommended by Engadget are selected by our editorial team, independent of our parent company. Some of our stories include affiliate links. If you buy something through one of these links, we may earn an affiliate commission.