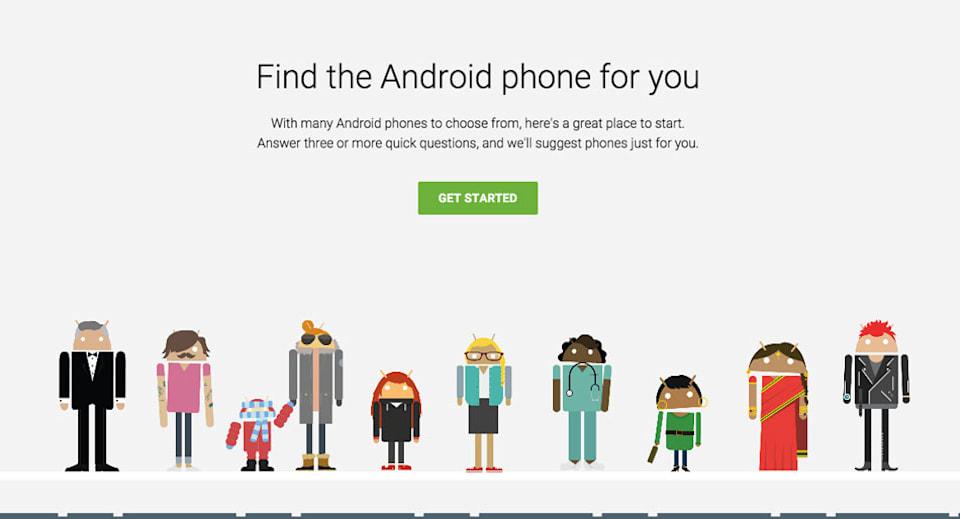 The sheer variety of Android devices out there means that it's hard to know which one best serves your needs. That's what we're here for, but if you'd prefer not to take the advice of technology reviewers, then Google is now offering a second opinion. The company has launched Which Phone, a website that asks you a handful of questions to narrow down which device you should purchase.

Would-be Android owners are asked which three things they do with their phone most often, from a list that includes the obvious things like Photos or Social Media through to Staying Fit and, uhm, "Expressing My Style." When you've gone through each one, you'll be asked how much time you spend on each activity and which American carrier you'd prefer to use. When that's done, you'll be offered up a trio or more of suggested devices.

Interestingly, we ran through the site several times, decreasing our requirements each time, until we were just asking for a device that could handle phone calls, texts and playing music. Despite this, the service only offered up a list of flagships like the Galaxy Note Edge, HTC One M9 and LG's G4. That's because you'll only be suggested lower-end models if you specifically select the low-cost tab on that final page. Still, seems like a bit of an oversight, since at first blush it looks as if only the very best phone would suit your needs.

In this article: Android, google, Selection, Suggestion, WhichPhone
All products recommended by Engadget are selected by our editorial team, independent of our parent company. Some of our stories include affiliate links. If you buy something through one of these links, we may earn an affiliate commission.