$299 buys you the ergonomic keyboard your wrists deserve 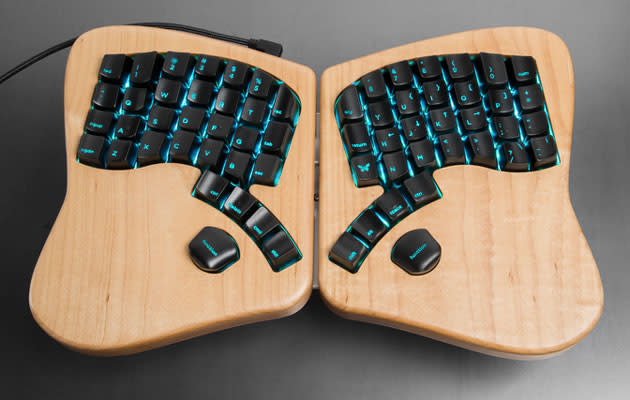 There are plenty of ergonomic keyboards, but the creators of Keyboardio believe that theirs is the only one that a serious typist should buy. It's been created by Jesse Vincent, a name familiar to anyone involved with the Perl community, who has spent more than two years researching the most comfortable way to type words. That's why the hardware comes in this exaggerated butterfly-style layout with heavily customized keycaps covering mechanical keys. Surrounding the outside is a maple wood exterior that, Vincent believes, makes it the first computer accessory made to "heirloom grade."

Open-source and customization are at the heart of everything behind the Keyboardio, so you can set the Model 01 at a variety of heights or split the two halves completely, should you choose. Beneath each of the custom keycaps you'll find a programmable LED as well as a mechanical keyswitch from Canadian company Matias. In fact, these are the same switches that you'll find in that company's Quiet Pro, combining a great feeling with office-friendly clickiness. The system's open-source software is also available for tinkering with, and users will be encouraged to share their tweaks with fellow users online.

As much as you may want one of these, you won't be able to sprint down to your nearest store to buy one. That's because, as always, the company is looking for your patronage on Kickstarter, with $299 securing you a Model 01. If you'd prefer something a bit fancier, then a small group of mahogany-enclosed variants will also be crafted, setting you back $999 a piece.

Shipping is due to commence in April 2016, but if you're not yet sold, there's also the option to try before you buy. Tomorrow (June 16th) will see the company kick off a nationwide tour of hackerspaces and "cool companies" for interested parties. The journey begins in Boston before heading to New York and across 20 major locations before concluding on July 13th in San Francisco. Full details, as well as everything else, can be found at the company's Kickstarter page.

In this article: JesseVincent, Keyboard, Keyboardio, Kickstarter, video
All products recommended by Engadget are selected by our editorial team, independent of our parent company. Some of our stories include affiliate links. If you buy something through one of these links, we may earn an affiliate commission.