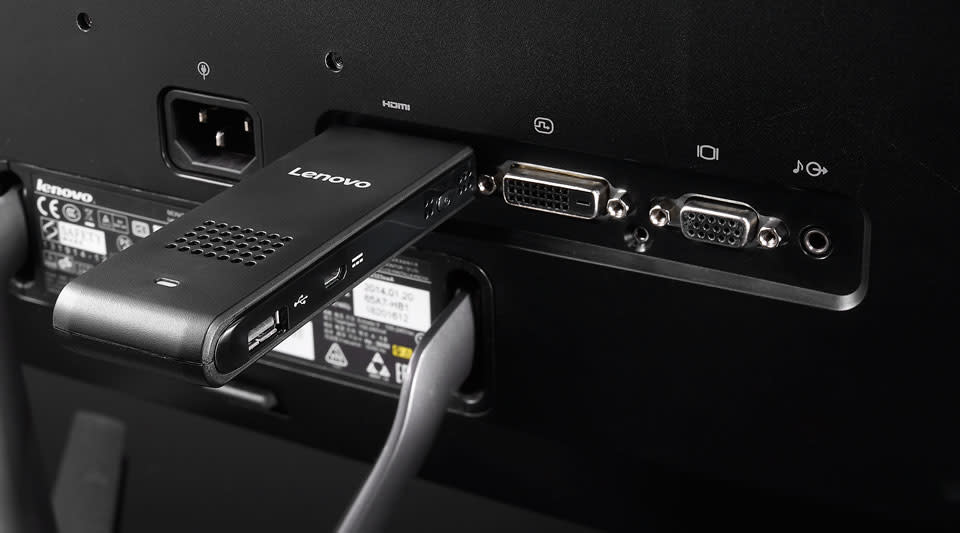 Who knew that stick computers were suddenly in vogue? In the wake of pocket-sized desktops from Intel, Dell and Google, Lenovo is joining the fray with the Ideacentre 300 Stick. The extra-tiny Windows PC is much like a sleeker, more polished version of Intel's Compute Stick. It shares the same 1.3GHz Atom chip, 2GB of RAM and 32GB of built-in storage as its counterpart, and you'll also have the familiar USB port and microSD card slot for those moments when wireless peripherals won't cut it. The system's biggest difference (and really, biggest draw) is its price. It'll cost $129 when it hits stores in July -- that's about $20 less than the Intel stick, and you're getting a full-fledged home computer versus a corporate "thin client" like Dell's similarly priced Wyse Cloud Connect. 7
In this article: atom, computer, desktop, ideacentre, ideacentrestick300, lenovo, pc, windows
All products recommended by Engadget are selected by our editorial team, independent of our parent company. Some of our stories include affiliate links. If you buy something through one of these links, we may earn an affiliate commission.