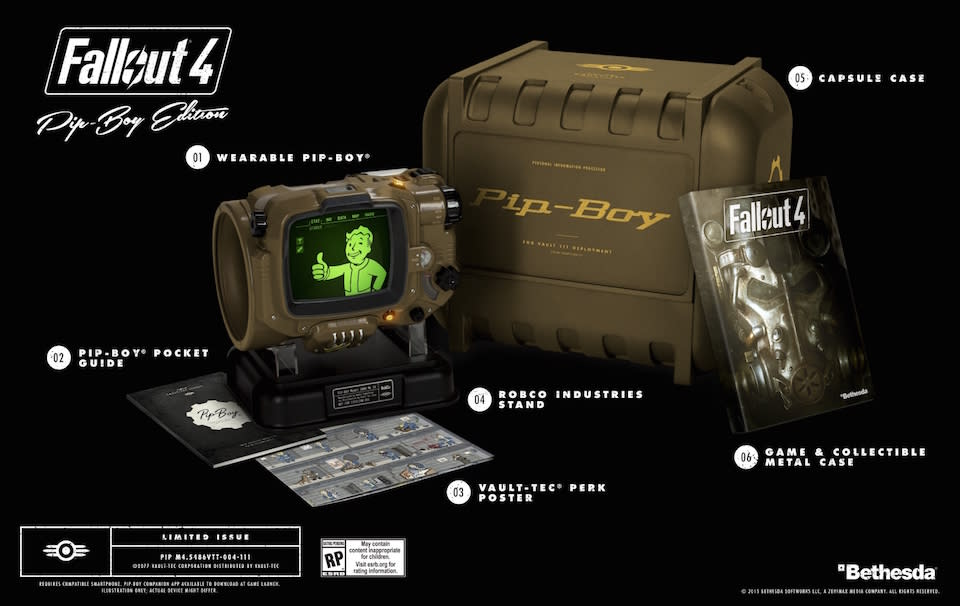 Thanks a lot, Bethesda. After the outfit's first E3 media briefing, I pre-ordered the Pip-Boy Edition of Fallout 4 because of course I want to put a real-life version of the game's stat-tracker and menu system on my forearm. All good, right? Well, I'm also in the market for a new phone and was eyeing an iPhone 6 Plus because it has a better camera and battery life compared to its smaller sibling, the iPhone 6. That's where the problems arise: Bethesda recently announced that the real-world Pip-Boy comes with foam inserts that fit the iPhone 4 and 4s, 5 and 5s and the 6 in addition to the Samsung Galaxy S4 and S5. The company also promises a customizable foam insert that'll accommodate "most other popular" handsets.

You'll notice that neither the iPhone 6 Plus or Galaxy S6 are listed there. Bethesda says that the reasoning behind the size restrictions is because it wanted to keep the dimensions of the real-life Pip-Boy faithful to those of the in-game model. However, this seems a bit short-sighted. The iPhone 6+ and the Galaxy S6 might be bigger, but they're also pretty popular and represent the best handsets made by their respective manufacturers.

The fact is, this isn't a life-or-death situation and I'll survive either way. But I do have a conundrum on my hands. Do I go for a smaller phone that'll work with the now sold-out Pip-Boy edition of the incredibly anticipated game, or do I stick with my original plan and buy Apple's flagship device? I'm not the type to upgrade my phone that often, and with what a contract-free 6 Plus will run me I'm going to use it until its metaphorical wheels fall off (or it's rendered obsolete via firmware update). I'm not a cosplayer either, so having a totally functioning Pip-Boy on my wrist isn't a huge deal. If my handset won't fit into the plastic sleeve, though, I'm not sure I need to drop $120 after all.

And just when I thought I'd had my new phone issues sorted, too...

In this article: bethesda, fallout, fallout 4, fallout 4 pipboy edition, fallout4, fallout4pipboyedition, gaming, hd, hdpostcross, iphone 6, iphone 6 plus, iphone6, iphone6plus, pc, PcGaming, PipBoy, pipboyedition, PlayStation, playstation4, xbox, XboxOne
All products recommended by Engadget are selected by our editorial team, independent of our parent company. Some of our stories include affiliate links. If you buy something through one of these links, we may earn an affiliate commission.