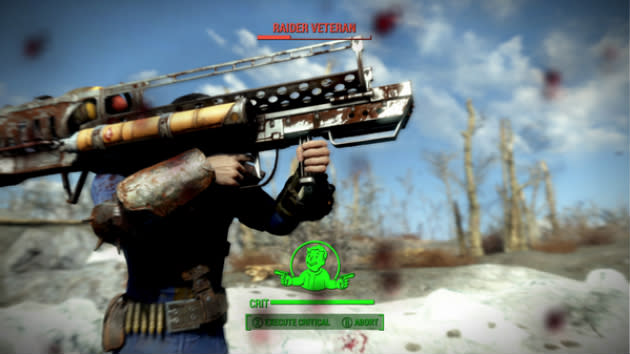 Fallout 4 is coming to PlayStation 4, Xbox One and PC on November 10th. Bethesda revealed Fallout 4 earlier this month with a teaser site and a trailer full of brighter colors and a friendly dog companion. Plus: The robot butler of your dreams. The Fallout team has been working on 4 since the launch of Fallout 3 in 2009, Bethesda announced on-stage today. Fallout 4 includes the series' most in-depth character-customization process and it showcases a dynamic dialogue system that lets you "walk away at any point." Also new in Fallout 4, there's a crafting system. Players can create their own settlements -- build power stations to run turrets and other fancy, electrical fortress elements. In addition, the weapon-modding system is robust, with 50 base weapons and more than 700 modifications, plus a separate UI for the power armor.

Every item is a resource in #Fallout4. Build anything you can imagine. #Fallout4 #BE3 pic.twitter.com/hhdRFhGGDn

Over 50 base weapons and over 700 mods. You can even modify your own power armor. #Fallout4 #BE3 pic.twitter.com/Pveaii94on

In this article: bethesda, BethesdaSoftworks, e32015, Fallout4, hdpostcross
All products recommended by Engadget are selected by our editorial team, independent of our parent company. Some of our stories include affiliate links. If you buy something through one of these links, we may earn an affiliate commission.