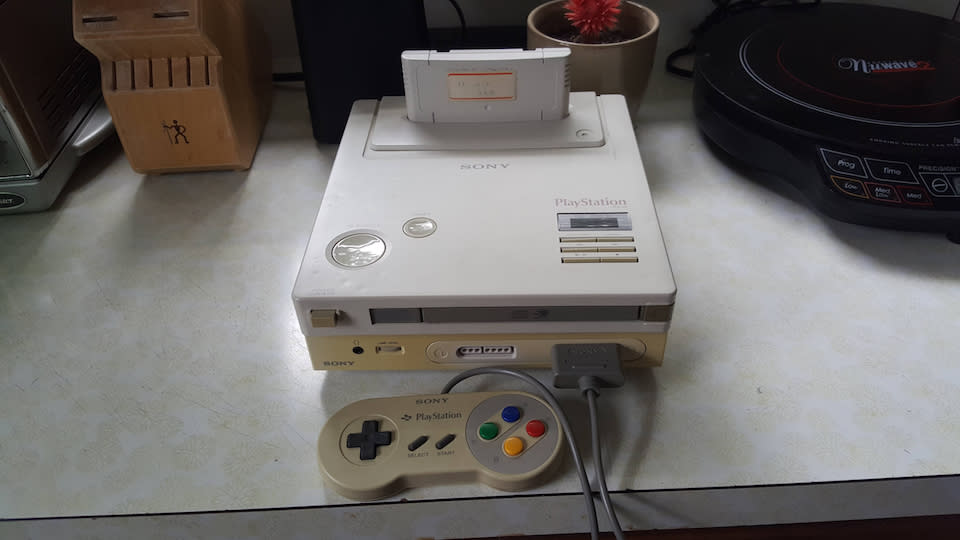 It might seem crazy today, but in the early '90s Nintendo and Sony were working together on a video game accessory that'd add CD capabilities to the Super Nintendo Entertainment System. There would also be a separate Sony console that'd play SNES cartridge games and titles for the SNES CD system dubbed the PlayStation. As legend tells it, the deal went sour when Nintendo instead announced a partnership with Sony's competitor Philips for the optical add-on at the same CES that Sony unveiled its Nintendo-centric PlayStation. The rest is history. What you see above might as well be a unicorn, then.

Reddit user Analogueboy recently posted pictures of what looks like a prototype of the original PlayStation, saying that it was in a box of his dad's junk. Apparently his pops had worked with someone named Olaf who was employed by the Mario company, who then left the console behind in a box of rummage.

As many have reported, this Olaf could possibly be the founder of Sony Interactive Entertainment, Ólafur Jóhann Ólafsson. That may or may not be true, but as far as we can tell this device isn't a fake. There's video evidence below and many more photos at the source link if you want to play detective for yourself.

In this article: gaming, hd, hdpostcross, history, nintendo, playstation, sony, suprdisc
All products recommended by Engadget are selected by our editorial team, independent of our parent company. Some of our stories include affiliate links. If you buy something through one of these links, we may earn an affiliate commission.