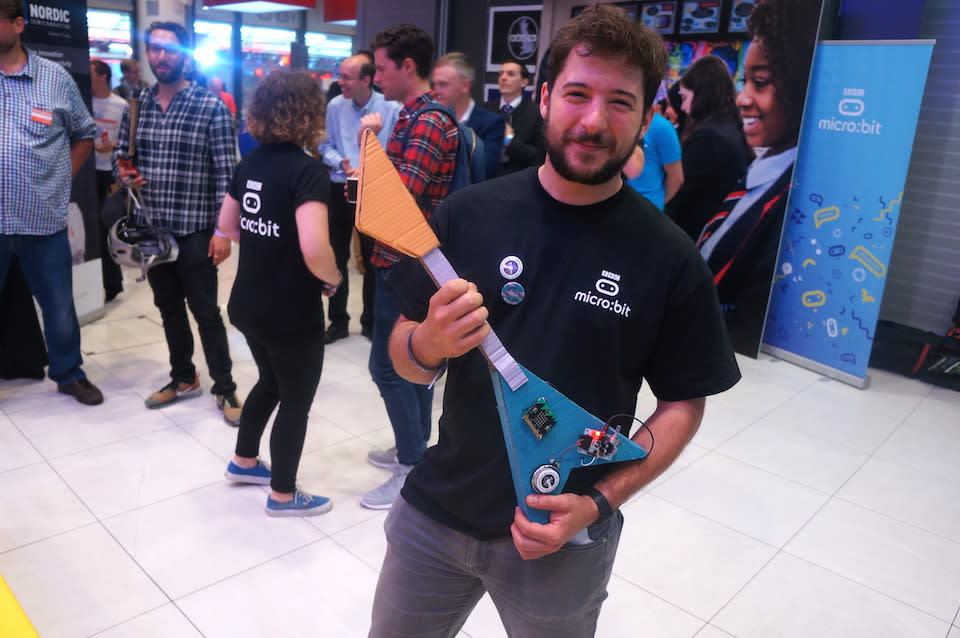 In the early eighties, the BBC started a computing revolution with the launch of the Micro. The heavy, light-brown box, created with help from Acorn and ARM, was designed to complement the broadcaster's ongoing computer literacy project. It was intended to give children a grounding not only in programming, but also graphics, sound and gaming. In the thirty-plus years that have passed, the BBC has remained committed to educating Britain's youngsters in the same fields, but didn't return to hardware until a few years ago. In 2012, a small team inside the BBC Learning department began work on a new project aimed at tackling the technology skills gap in the UK. It was the very start of what we now know as the Micro:bit. It was developed with the idea of encouraging children to think about computers and tablets not as things you simply use, but as devices that can be used to create.

The team hacked together prototypes, creating rudimentary circuit boards that demonstrated what they wanted to achieve. But, it looked out of place in a world filled with Raspberry Pis, Arduino boards and other education-focused programmable microcomputers. The BBC knew it couldn't do it alone, and so had the idea of collaborating with UK partners to put its vision into the hands of one million Year 7 (11- and 12-year-old) students. The response was enormous. At today's launch, the BBC counted 29 partners, ranging from manufacturers, software makers, retailers and educators. Microsoft, Samsung, ARM (a company full of executives who cut their teeth on the BBC Micro), the Bluetooth SIG, Element 14, Lancaster University and more have pooled their resources to hold the hands of teachers, children and an emerging young maker community.

Microsoft, for example, has modified its beginner-friendly TouchDevelop platform specifically for the Micro:bit. TouchDevelop lets developers of any skill level create apps for smartphones, tablets or PCs, whether they're using Windows, Mac, Linux, iOS or Android. For the new initiative, it'll host the code and projects of all one million developer boards. The Micro:bit supports up to five different programming languages, which include JavaScript, C++ and Block, with Microsoft providing two of them.

The Micro:bit itself hosts 25 red LEDs, all of which can be programmed to display messages, deliver the graphics for games or other feedback. The two push-buttons on its rear can act as inputs for a game controller, or help children create basic rewind and fast-forward buttons on a music player. The built-in accelerometer detects movement, which is perfect for creating programmable "robots," while a compass tells it which way it's facing.

Indeed, the BBC's demonstration area was filled with clever creations. Micro:bits were fixed to all manner of household items, including a frying pan that tells you when to flip a pancake or when your omelette might be burnt. Another company had outfitted a toy car with the BBC microcomputer, letting you drive it around a ready-made track with a smartphone app. One internal BBC project involved modified ping-pong bats that lit up a strip of coloured LEDs when the ball was hit. The exhibits give a small taste of what is possible with the Micro:bit, but the BBC knows that when the devices reach Britain's Year 7, the real fun will begin. With a lot of early insight from teachers, the BBC and its partners have created a microcomputer that aligns closely with the curriculum. Before launch, the broadcaster seeded a small number of prototypes to schoolchildren, who created a basic version of Rock, Paper, Scissors, and a pizza tracking bot. With one million units in kids' hands, the possibilities are infinite.

The BBC's commitment to openness is key here: the first batch of Micro:bits will reach teachers in September, who will have time to create learning environments ahead of a large-scale rollout in October. Once distributed, the technology will be licenced so companies all over the world can make their own Micro:bits for schools. The BBC has formed a non-profit company to do so, which will also open-source the board's specifications. Educators will be spoilt for choice: they'll have access to Raspberry Pis, Arduinos, Micro:bits and others, which can all provide a solid foundation for children to understand more about the technology they use, and perhaps influence the way it's headed in decades to come.

In this article: children, kids, microsoft, programming, samsung, uk-feature
All products recommended by Engadget are selected by our editorial team, independent of our parent company. Some of our stories include affiliate links. If you buy something through one of these links, we may earn an affiliate commission.