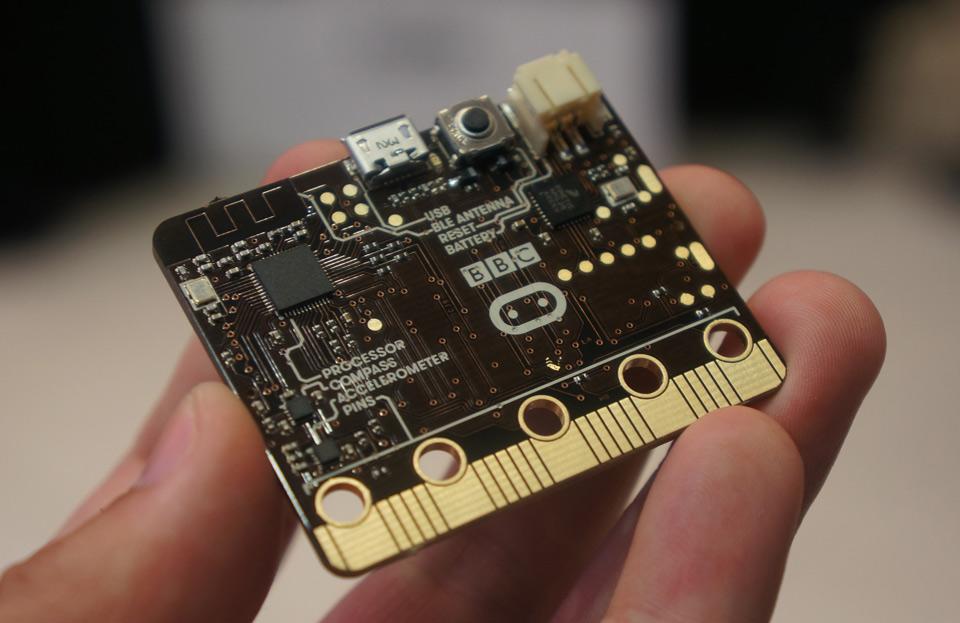 The Raspberry Pi has been a huge success story for Britain, giving millions of people an affordable way to tinker and learn with pocket-sized hardware. Now, the BBC is hoping to make a similar impact with the "Micro:bit." Like the Raspberry Pi, this tiny computer has been created to help youngsters learn the fundamentals of programming and computer construction. Today in London, the broadcaster unveiled the Micro:bit's final design -- a rectangular, credit card-style board measuring 4cm by 5cm -- and some of the all-important hardware features. These include 25 red LEDs, which can show messages and facilitate games, two programmable buttons, an on-board accelerometer and magnetometer. The device also offers Bluetooth LE connectivity, a microUSB slot and five input and output (I/O) rings that can be hooked up with crocodile clips and 4mm banana plugs. It's been a while since the original BBC Micro was considered cutting edge, but even so -- this new device is roughly 18 times faster and 67 times lighter than its spiritual predecessor. The BBC has a slew of partners for the Micro:bit, including ARM, Microsoft, Samsung and Barclays. The broadcaster will be giving away 1 million devices to every year 7 student (11 and 12-year-olds) in the UK this October, with the idea being that they'll form the core of their learning and projects. Being so small, students will be able to carry them between classes, compare modifications in the playground and collaborate on assignments. The BBC will also be launching a website later this summer where students can learn how to program the Micro:bit and simulate creations before transferring them to their device.

If, like us, you're not in school anymore, there should still be a way to jump on the Micro:bit craze. The BBC says it'll open-source the specs and launch a not-for-profit company later this year tasked with overseeing the initiative. Eventually, that'll involve creating new Micro:bit computers and making them commercially available in the UK.

In this article: arm, bbc, bbcmicro, coding, education, microbit, microcomputer, microsoft, progamming, raspberrypi, samsung
All products recommended by Engadget are selected by our editorial team, independent of our parent company. Some of our stories include affiliate links. If you buy something through one of these links, we may earn an affiliate commission.