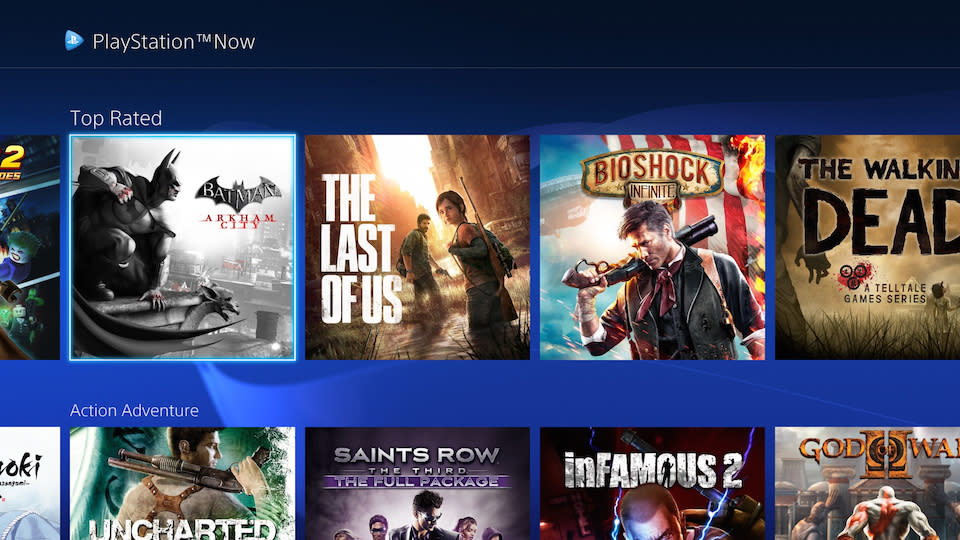 PlayStation Now's all-you-can-play game subscription service launched back in January on PlayStation 4, but the method for actually playing those games has been kind of a nightmare. Today's news of a dedicated subscription app might change that. Before this, every time you wanted to stream a new game, you had to go through the PlayStation Store, sift through a handful of menus, pick something (much like you would to purchase a game) and then hope that it even launched the first try. A streaming app that minimizes menu fatigue and works along the lines of a Netflix or Hulu actually makes a lot of sense here.

"The current experience is a little bit transactional, it feels like, 'Okay, I've gotta pop in and [then] back out [to play],'" Robert Stevenson of Gaikai, the outfit Sony bought for its streaming infrastructure, says. "You might join the subscription for a marquee title -- God of War or something that you've never played and you want to go back and play it. Then there's probably a dozen or two other games that you might like," Stevenson says. "But actually finding and locating that content is a little tricky."

The new application hopes to streamline the process. And perhaps what's doing the brunt of the heavy lifting then is the simultaneously familiar and new interface. Codenamed Apollo, it takes cues from other streaming services in an effort to make it easier to find what you want to play among the current 125 or so games available for streaming. It's dominated by rows of big, splashy images for each game and a minimal amount of clutter surrounding them. Take a look at the Batman: Arkham City screenshot below for an example. "We built a new categorization for the games; the actual navigational paradigms are different, the product detail scene is different," Stevenson says. Pick what you want to play and the bare essentials appear: a large image, user ratings and reviews. It looks a lot like Netflix. Stevenson says this reduced information density comes from some extensive user tests to learn what customers care about when they're browsing digital catalogs and trying to figure out what they want to play next.

As the number of games on the subscription service grows, that kind of design and organization becomes much more important. Not only to help allay paralysis of choice, but for Sony to keep customers on the hook for between $15 and $20 per month. There's a free 7-day trial for new subscribers if you want to check out the shiny UI first hand, and the app should be live by the time you've finished reading this post.
In this article: gaikai, gaming, hd, hdpostcross, netflix, PlayStation, Playstation3, playstation4, playstationnow, ps4, psnow, robertstevenson, sony, streaming
All products recommended by Engadget are selected by our editorial team, independent of our parent company. Some of our stories include affiliate links. If you buy something through one of these links, we may earn an affiliate commission.