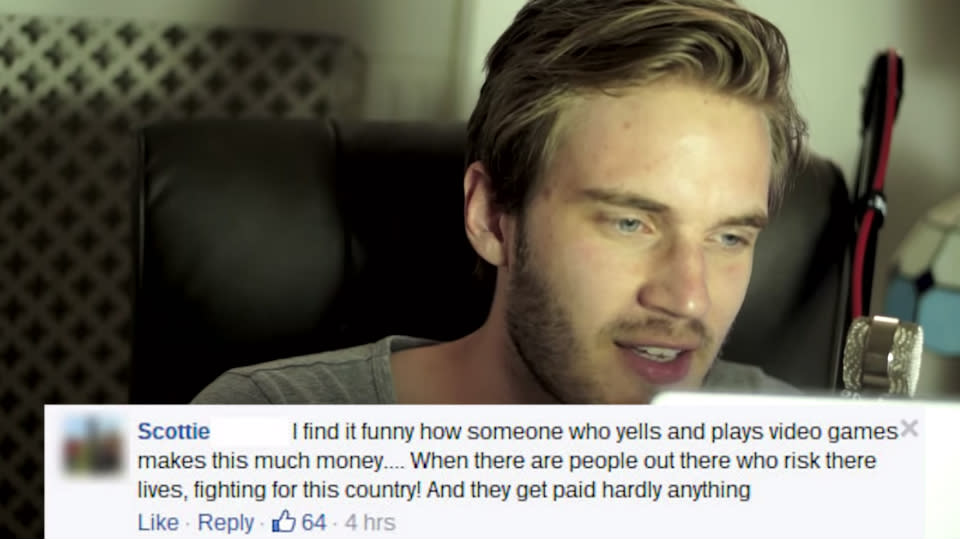 Felix Kjellberg, better known as PewDiePie, made a lot of money last year. His company, PewDiePie Productions, brought in about $7 million in revenue, mainly off of Kjellberg's YouTube videos where he plays video games and reacts in silly ways. With those videos, he's also raised more than $1 million for charity over the years. Kjellberg has 37.7 million subscribers on YouTube and about 9 billion views overall -- considering that he receives ad revenue based on the number of views his videos get, it's not surprising that he's making serious bank. However, When news of Kjellberg's revenue hit the 'net, quite a few people responded with anger, outrage or thinly veiled jealousy, as they do any time that PewDiePie's revenue goes public. This year, Kjellberg made a video addressing the money issue, including a brief description of his not-so-glamorous life before YouTube.

"Whenever it comes out how much I made a certain year, people just get so shocked," Kjellberg says. "A lot of people also, which I saw, were very, very angry. They thought it was unfair. They thought I just sit on my ass all day and I just yell at the screen over here -- which is true." He laughs. "But, there's so much more to it than that."

Before hitting it big on YouTube, Kjellberg worked at a hot dog stand. He started making videos because he saw a hole in the YouTube market -- no one had the video game audience on lock -- and because he thought it was fun, he says.

"I am just as happy as I am now as I was five years ago," Kjellberg says. "I'm very happy that I don't have to worry about paying rent, because that was a huge issue.... To see so many people being upset about this whole thing, it's so sad. It's such a waste."

Hear more of Kjellberg's thoughts on money and haters below (and watch him read some of the weirdest comments he's received over the past few days).

In this article: haters, hdpostcross, letsplay, money, pewdiepie, streaming, youtube, youtuber
All products recommended by Engadget are selected by our editorial team, independent of our parent company. Some of our stories include affiliate links. If you buy something through one of these links, we may earn an affiliate commission.