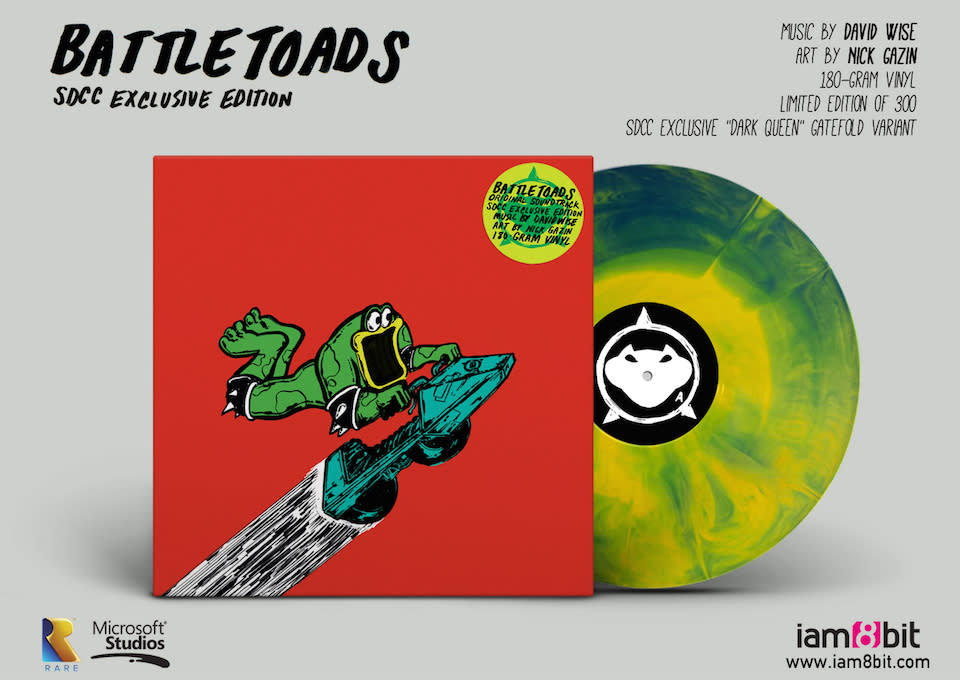 The rumors circling a Battletoads return came to a head at E3 this year with the announcement of the Rare Replay collection, and Microsoft didn't waste its next tradeshow appearance for a chance to capitalize on the hype. Folks roaming San Diego Comic Con can pick up a limited edition soundtrack for the amphibious beat 'em up on a very fitting yellow and green 180 gram LP. If the cover art up above looks a little familiar, that's because it was done by the same artist responsible for Run the Jewels' records, Nick Gazin. The SDCC run is $25, limited to 300 copies and features different art than what'll be sold outside of the show later this year, according to Entertainment Weekly. That's not all, either: the folks at iam8bit have a Con-exclusive screen-printed poster featuring all 30 of the games in the Rare Replay. That goes for $50 and could very well be a SDCC exclusive -- the art-minded company hasn't revealed if it'll be sold outside the show just yet.

In this article: battletoads, gaming, hd, iam8bit, microsoft, nickgazin, rare, rarereplay, runthejewels, sdcc, sdcc15, sdcc2015, soundtrack, vinyl
All products recommended by Engadget are selected by our editorial team, independent of our parent company. Some of our stories include affiliate links. If you buy something through one of these links, we may earn an affiliate commission.