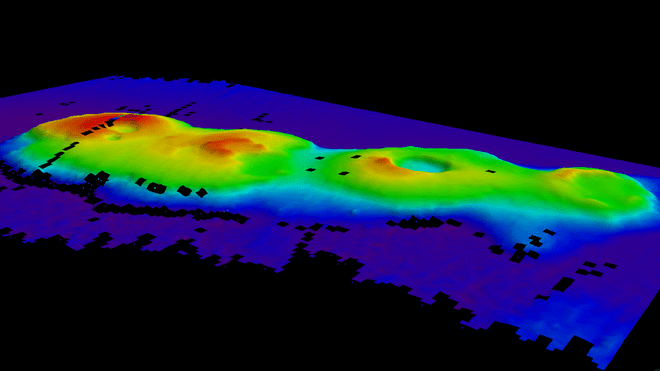 You never know what you might find when you're looking for lobster larvae. Iain Suthers, a marine biologist at the University of New South Wales, recently led a team of 28 scientists on board Australia's latest research vessel, Investigator. They set out to study nursery grounds of lobsters when they accidentally stumbled upon four ancient underwater volcanoes off the coast of Sydney. The massive cluster of craters, said to be about 50 million years old, stretches across 12 miles on the seafloor but had gone unnoticed until now.

The ship that made the discovery possible is a $120 million federally-funded vessel that was commissioned by the CSIRO in 2009. It surpasses similar sonar-mapping ships with its ability to scan even the deepest points of the seabed. The newly discovered volcanoes were found almost three miles deep in the ocean. They're said to be the remnants of the geological plate shift that separated Australia and New Zealand millions of years ago. According to Suthers, the discovery demonstrates that we know more about the surface of the moon than our oceans. "We went there to look at eddies in the east Australia current and it was completely serendipitous to find this volcano cluster," he told Guardian Australia. "We can only just imagine what will be around the corner if we continue to scan this area."

In this article: australia, ExtinctVolcano, InvestigatorShip, LobsterLarvae, SonarMapping, volcanoes
All products recommended by Engadget are selected by our editorial team, independent of our parent company. Some of our stories include affiliate links. If you buy something through one of these links, we may earn an affiliate commission.