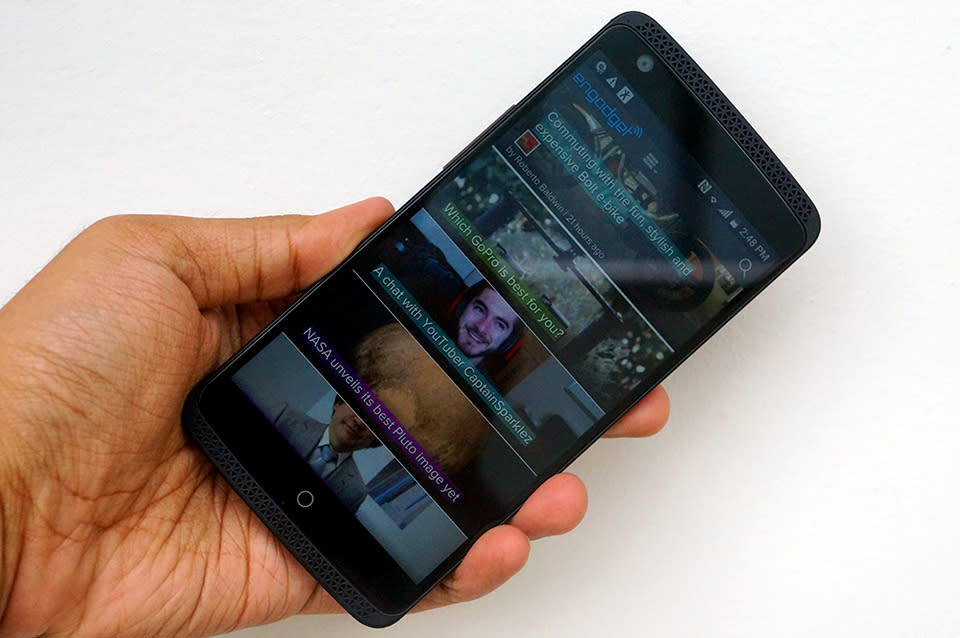 That's not the sort of bluster you'd normally hear from Lixin Cheng, CEO of ZTE's American division, but he proffered it several times during a pre-show pow-wow to make sure it stuck. Not long after that, Cheng and his team pulled back the curtain on the $450 Axon -- a phone that really, really doesn't feel like the company's usual fare. It's all metal, runs a deliciously near-stock version of Android 5.1.1 and packs one of Qualcomm's updated Snapdragon 810 processors with 4GB of RAM for good measure. Make no mistake: The Axon is a full-on flagship from a company that hasn't always had the best luck making them. Perhaps naturally, Cheng thinks his chances with Axon are pretty good. As far as he's concerned, more than a few players currently fighting for US recognition with cheap, good-ish phones are just taking devices launched in other markets and dumping them here. The Axon was designed to be the antithesis of those phones, something built around surveys and feedback straight from the mouths of American consumers. If the Axon's feature set is a hint, we're a country of finicky photographers (the Axon sports a 13MP rear camera lens and can capture 4K video) and sound buffs (it has two dedicated sound chips) who love hi-res screens (the Quad HD screen is 5.5 inches wide). Even the Axon name apparently came to be thanks to customer feedback, though I wonder if the phone's design got the same sort of focus-testing rigor -- it's festooned with pleasantly funky honeycomb-like grids near the front speaker and the dual-camera setup. The Axon is also one of the thicker flagships I've seen lately, but it shouldn't strain your skinny jeans too much. Its lightweight metallic construction and sloping back kept it from feeling too substantial in my hands, to boot. My biggest question mark? There's a row of capacitive nav buttons just below the screen, but the ones to the left and right of the home button are just... dots. Would it have really hurt to add "Back" and 'Recent apps" icons?

At the risk of sounding like a broken record, smartphone performance is always a tricky thing to suss out at events like these. Fortunately for ZTE, this first Axon (Cheng's already got one dreamed up for next year) is the sort of effortlessly smooth that high-end hardware so often achieves. I didn't stumble across any stuttering or slowdown despite being sort of a jerk to it; it just works. We'll dig more into the performance particulars in our full review, but I got enough alone time with the thing in a secluded area to watch AndEBench crash on the thing twice. C'est la vie -- this is non-final hardware. At the very least, the thing sounds pretty good. Alexis Cole's "Ain't We Got Fun" felt spacious and warm even through a pedestrian pair of Sony earbuds, though it wasn't dramatically better than the sound coming out of an iPhone 6. Alas, it was nigh impossible to tell how good the single speaker (yeah, those grilles up front are a little misleading) sounded amid a crowd of nerds. All told, ZTE did something I more or less thought impossible: It made a phone I actually want to use. The bigger question (and the one a pensive Mr. Cheng is certainly pondering right now) is whether one good phone is enough to get the ZTE name stuck in people's heads. I'm not convinced, but hey -- I'm more than happy to be proven wrong.

In this article: android, axon, mobile, mobilepostcross, phone, smartphone, zte
All products recommended by Engadget are selected by our editorial team, independent of our parent company. Some of our stories include affiliate links. If you buy something through one of these links, we may earn an affiliate commission.