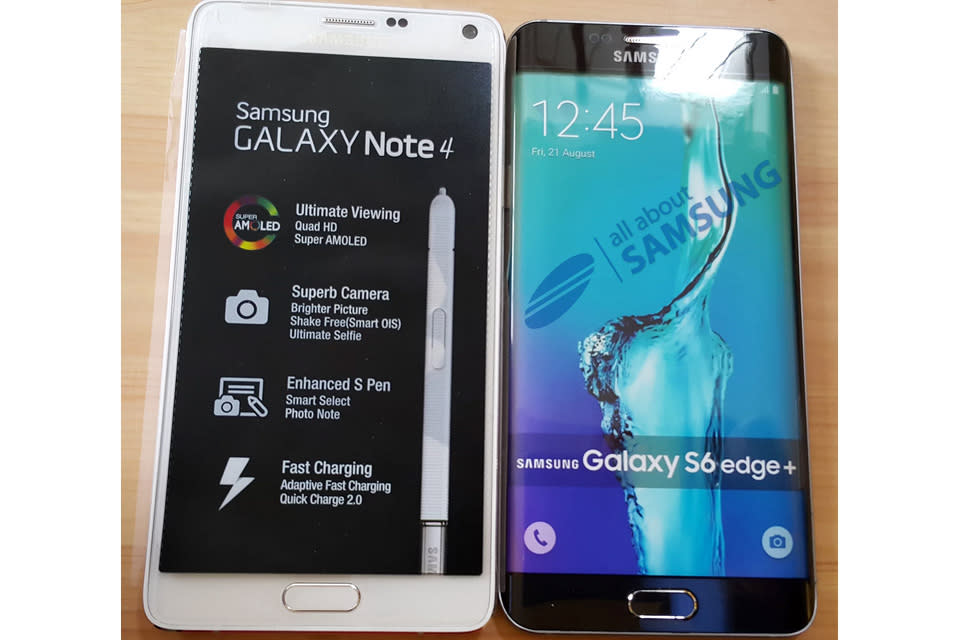 Samsung may not be pinning all its hopes for summer phone supremacy on the Galaxy Note 5. All About Samsung has posted photos of what's supposed to be a store dummy unit for the Galaxy S6 Edge+, an extra-large version of its dual-curve flagship. There isn't much to reveal about what's under the hood, but it's clear that the screen is about as large as what you'd see on the Note 4 (that is, around 5.7 inches). Also, there are no obvious hardware tricks here -- the curve isn't pronounced enough for a Note Edge-style strip, and you certainly aren't going to find a pen, microSD slot or removable battery.

As for what's under the hood? That's not so certain, although the current talk is that you might find the same eight-core Exynos 7420 chip that you get in the regular S6 Edge. If so, that'll make the Edge+ little more than an upscaled version of the phone you already know. It'd be a challenger to Apple's iPhone 6 Plus and its eventual sequel, rather than an upgraded device à la HTC's One M9+. Not that we're necessarily complaining, especially as FCC filings suggest that the Edge+ is coming to major US carriers. Historically, Samsung has only offered one giant high-end phone at a time -- if this leak is accurate, you'd finally have the choice of additional big-screened Sammys that aren't big steps down.

In this article: android, galaxys6edge, galaxys6edgeplus, mobilepostcross, samsung, smartphone
All products recommended by Engadget are selected by our editorial team, independent of our parent company. Some of our stories include affiliate links. If you buy something through one of these links, we may earn an affiliate commission.