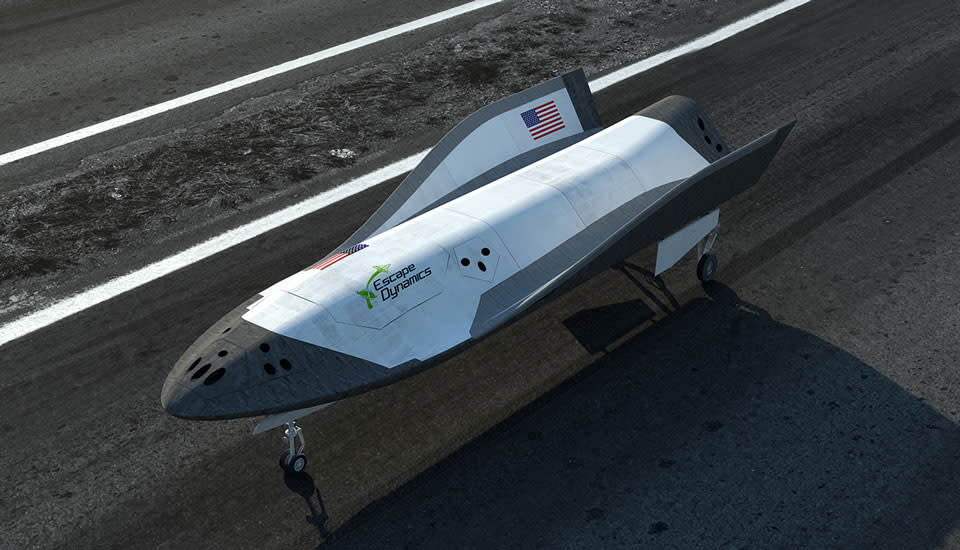 How much does it take to launch a satellite? According to Rocket Lab's Peter Beck "You pretty much have to write a check for a billion dollars." Beck, along with Jeff Bezos and Elon Musk are part of a new wave of inventors looking to make this cheaper by developing low cost or reusable rockets for launches. The folks at Escape Dynamics, however, have a very different idea about how to make trips to space economical for people who aren't multi-millionaires. The company claims that it's successfully tested the engine for a reusable spaceplane that, rather than being stuffed to the gills with expensive fuel, would glide into the stratosphere on a wave of microwave energy.

With traditional launch systems, the bulk of the weight and resources goes to filling a tube with explosives. Naturally, that's quite wasteful, so the proposed vehicle would ditch almost all of its on-board power systems. Instead, it would receive energy from a series of ground-based microwave emitters which pump power right into a collector based in the plane's heat shield. That energy would then be used to drive an electromagnetic motor that ignites superheats a small quantity of on-board fuel (hydrogen or helium, for instance) that's then ejected as thrust to get into orbit.

The company claims that the engine running on helium was able to achieve a Specific Impulse (the equivalent of MP/H for a rocket) of 500 seconds. By comparison, Escape Dynamics says that your average chemical rocket tops out at 460, and if the test vehicle had been running hydrogen, that figure could rise to 600 Isp. That could prove to be a big breakthrough for the private spaceflight industry, assuming that these results can be replicated outside of the lab.

As Gizmodo notes, however, the idea is a little bit pie-in-the-sky, since the company would have to build a global network of microwave emitters to keep the craft aloft. Then there's the various environmental and energy considerations that such a system would have to deal with, not to mention the political aspect. Still, if ED can, somehow, create a dirt-cheap reusable spaceplane that'll do away with expensive rockets, we imagine plenty of people would get behind the idea.

In this article: EscapeDynamics, Microwave, PrivateSpaceflight, Reusable, ReusableRocket, Space, Spaceplane, video
All products recommended by Engadget are selected by our editorial team, independent of our parent company. Some of our stories include affiliate links. If you buy something through one of these links, we may earn an affiliate commission.