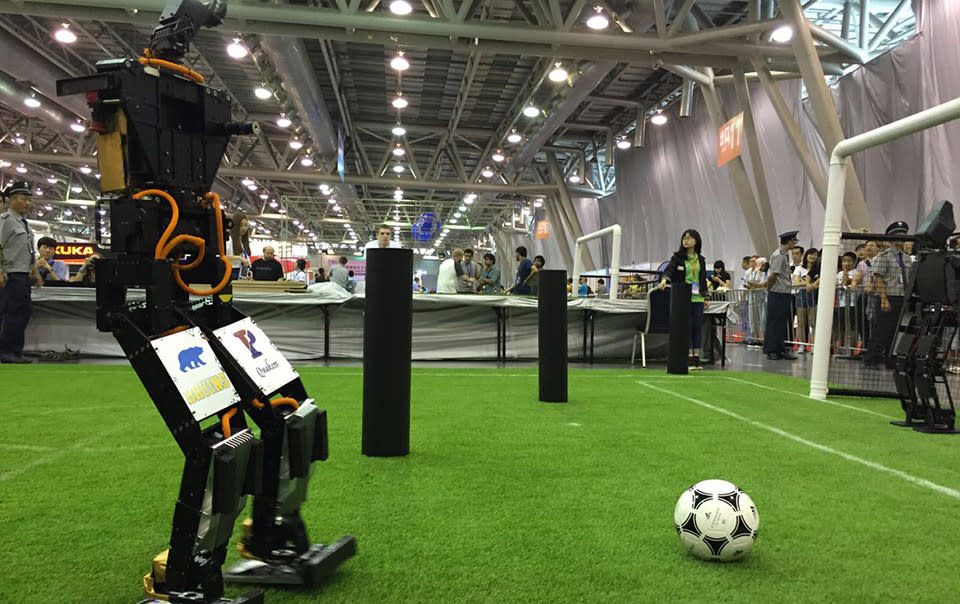 THORwin isn't can't quite bend it like Beckham, but when it comes to robotic soccer players, it's one of the best. The US-made machine has just won top prize in the adult-sized category at this year's RoboCup in China, an international annual soccer competition for robots that aims to pit them against human players by 2050. THORwin, which was named after "Tactical Hazardous Operations Robot" and Charles Darwin, is five foot tall and weighs 119 pounds, while the contenders in the teen- and child-sized categories were much, much smaller. They all had to be able to play autonomously, sense opponents, dribble the ball past them and shoot goals, though -- just like in real soccer, except they're all stiffer, more awkward and more prone to falling over than human athletes at this point in time.

THORwin, a joint project between UCLA's Robots and Mechanisms Laboratory (RoMeLa) and UPenn's General Robotics Automation, Sensing and Perception (GRASP) Laboratory, won the finals against Iran with a score of 5-4. In addition to RoboCup, it also participated in DARPA's Robotics Challenge earlier this year. By the way, you can watch a UPenn robot play ball below so you can understand what we meant by contenders being "awkward" on the field, but note that it's a different smaller machine and not not the RoboCup champion

In this article: robocup, soccer, thorwin, ucla, upenn
All products recommended by Engadget are selected by our editorial team, independent of our parent company. Some of our stories include affiliate links. If you buy something through one of these links, we may earn an affiliate commission.