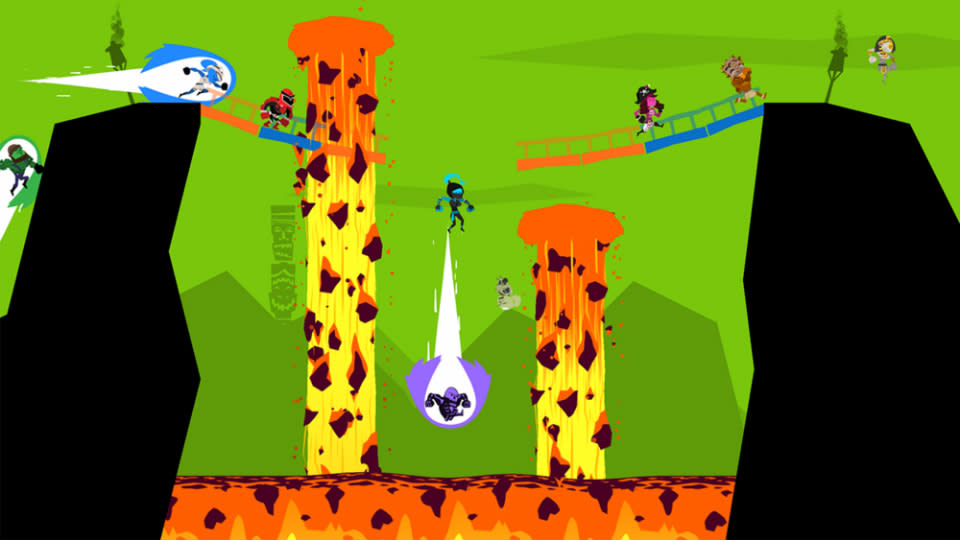 Developers Dave Proctor and Alex Rushdy of 13AM Games are in the middle of an impassioned conversation about the Wii U and independent development.

"I think the industry is getting into a habit of unsustainably large development, where it's like, 'Ugh, of course the Wii U can't run Assassin's Creed Unity,'" Proctor says.

Rushdy cuts in, "Nothing can run Assassin's Creed Unity." Proctor and Rushdy share a laugh before getting back to the point of the day's interview: They've spent the past one and a half years developing Runbow, a fast-paced, nine-player game, exclusively for the Wii U. Yes, that's nine players all in the same room, playing the same wild Wii U game. It's a colorful, 2D platformer aesthetically inspired by 1960s poster art and featuring famous guest characters, including the eponymous hero of Shovel Knight, Juan Aguacate of Guacamelee and CommanderVideo of the Bit.Trip series. It's the type of game that Proctor wants to see more of in the gaming industry, instead of the current emphasis on massive, yearly sequels and big-budget military shooters. It's the type of game that makes the Wii U worthwhile as a gaming platform, he says.

Basically, 13AM's argument for the Wii U boils down to this: Just because consoles like the PlayStation 4 or Xbox One can run Assassin's Creed Unity, that doesn't make it a good game -- and the Wii U isn't a bad console just because it can't run games like Unity.

The Wii U isn't a bad console just because it can't run games like Unity.

Runbow is a Wii U exclusive for a few important, non-Assassin's Creed-related reasons, starting with Rushdy's and Proctor's lifelong love of Nintendo. Another main reason is that Nintendo fans are hungry for new, fun content and they're passionate about things like perfect platforming jumps. Plus, Rushdy believes the Wii U offers something that's often overlooked in current console discussions:

"I also think a big strength of the Wii U that I don't hear people talk about a lot, is the fact that it's compatible with all of the old controllers that you had for your Wii," he says.

"One of the reasons that Runbow is going to be on Wii U is that, generally speaking, if you own a Wii U, you probably owned a Wii or you had a friend who owned the Wii or whatever it is," Rushdy continues. "So, if you're like, 'Hey, I want to get nine players in my house playing this game,' you don't have to go and buy, you know, eight $60 controllers. You probably already have them."

Rushdy and Proctor have spent so much time together over the past year and a half that they often speak like a couple, seamlessly building on each other's thoughts during the interview. ("This came up when you and I were talking in the kitchen the other day," Proctor says at one point, while Rushdy nods, remembering.) They agree about a lot of things, including Runbow's potential to be a hit on Wii U, despite the console's reputation as an irrelevant piece of hardware. Nintendo has sold about 9.5 million Wii Us since the console's launch in November 2012; in comparison, Sony's PS4 broke the 20 million sales mark in March, after launching in November 2013, a year later than the Wii U.

This sales discrepancy is something that Rushdy and Proctor considered before developing a game specifically for the Wii U, but they're not too worried about it.

"The kind of games we want to make aren't very technically heavy. ... We like 2D stuff. We like simpler games."

"Anyone that tells you that they're not concerned about the potential revenue of their game is a total liar," Proctor says. "I have confidence. I feel good. Yes, it's not the highest sales, but it's not so far off of the Xbox One that it's drowning. And the fanbase is so rabid, which I really like. They have a really good -- I've listened to some talks and some numbers -- they have a really good install base with the eShop for digital titles and stuff like that."

Rushdy adds, "When Wii U owners like a game, they really like a game." 13AM Games released a demo of Runbow during the week of E3 2015, and the "response has been really good," Rushdy says. Besides, Wii U games definitely can sell well -- Splatoon crested 1 million sales in its first month, and after one month on the market, third-party game Shovel Knight sold almost as well on Wii U and 3DS as it did on Steam, the dominant PC gaming platform.

Runbow is optimized to run at 1080p on Wii U, something that was a "pain in the ass" to do, Proctor says -- but it's something that current-generation gaming fans really like to see.

"There are technical limitations [with the Wii U], as there will be with anything," Proctor says. "Conveniently for us, the kind of games that we want to make aren't very technically heavy, inasmuch as they're not gray and brown. We like 2D stuff. We like simpler games."

"The word 'indie' is actually kind of damaging in a way. There's a certain baggage that comes with it."

"Make a smaller game," he suggests. "Show people that there's value in a huge company making a $15 to $20 game. Show them that it's not price and it's not development time or budget that defines fun or quality of experience. Actually demonstrate to the people that may not go out of their way to try indie games that they can have fun for 15 bucks." Rushdy takes an in-house approach: He says it's up to smaller developers to prove that "indie" isn't a curse word and good games can still come from tiny teams. He hopes that Runbow does this, in its own way, when it launches later this year.

"We wanted to pack a lot into it so that it doesn't feel like this is a little indie game," he says. "We really want to give people a lot of bang for their buck. So, for a lot of these indies that are becoming bigger and bigger, the word 'indie' is actually kind of damaging, in a way. There's a certain baggage that comes with it. As much as I'm proud to say I'm an indie developer and our game is proud to say that it's an indie game, there's a certain baggage with that."

[Image credits: 13AM Games]
In this article: 13amGames, hdpostcross, Indie, nintendo, runbow, uk-feature, video, WiiU
All products recommended by Engadget are selected by our editorial team, independent of our parent company. Some of our stories include affiliate links. If you buy something through one of these links, we may earn an affiliate commission.