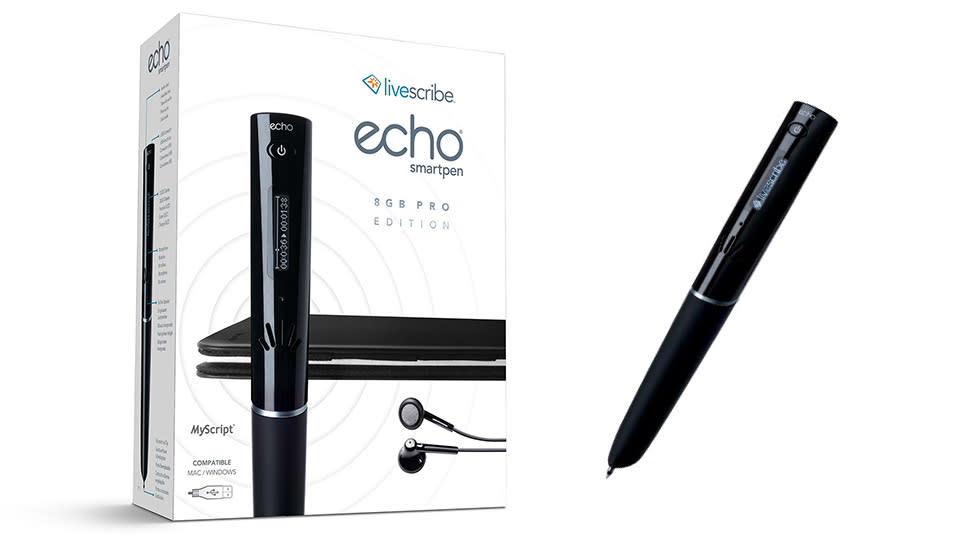 Livescribe has refreshed one of its older smartpens from way before it had an option that can automatically sync with iOS and Android devices. The new Echo 8GB Pro edition can save up to 800 hours of recording and connects to a Mac or a Windows computer via old-school USB connection, just like its predecessor. It doesn't differ that much from its older sibling, so it's presumably more powerful, with more advanced components. Similar to other Livescribe pens, Echo Pro digitizes what you write on the company's special dot paper and records audio, such as a professor's lecture (or incessant droning, depending on how you see it) at the same time.

Even better, you can sync your notes and recorded audio in what Livescribe calls a "pencast," which you can upload to the computer and manage using the Echo Desktop software. The latest version of that software was designed to be easier to use, and clicking around your notes on the computer takes you to the part of the recording you want to listen to. If you're in the US and prefer a smartpen that syncs with a computer instead of a mobile device, you can get the Echo Pro straight from Livescribe for $200. Otherwise, you can grab one from Amazon wherever you are in the world.

In this article: echo, echopro, livescribe, smartpen
All products recommended by Engadget are selected by our editorial team, independent of our parent company. Some of our stories include affiliate links. If you buy something through one of these links, we may earn an affiliate commission.