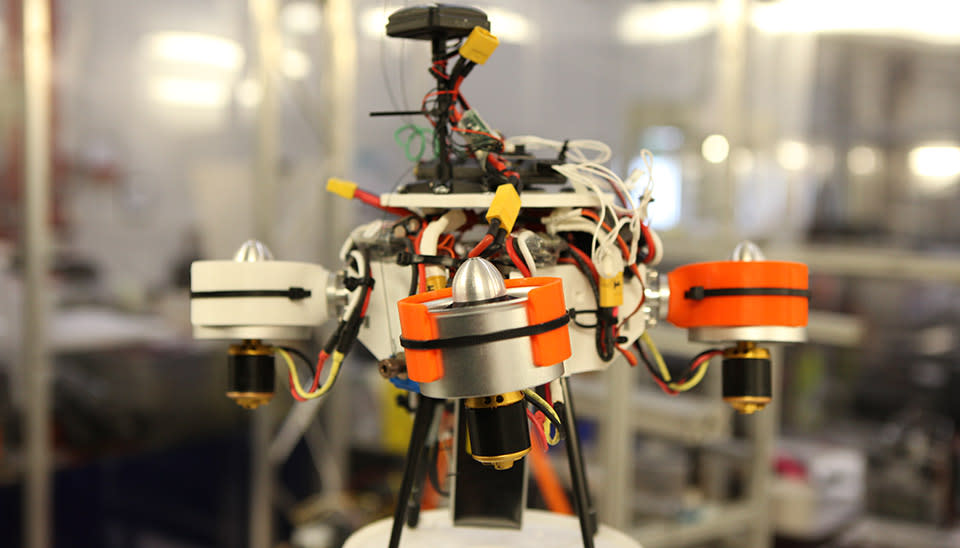 While Curiosity's doing a great job on the red planet, there are still areas it can't go to, such as steep cliffs/hills and locations hidden by permanent shadows. That's why the engineers at NASA Kennedy Space Center's Swamp Works laboratory are developing drones that can withstand harsh conditions on other planets and navigate extraterrestrial terrain. These machines, collectively called "Extreme Access Flyers," will be gathering samples from places rovers can't access and will be charging their batteries/replenishing propellants by perching on a companion lander in between flights.

They'll have rotors much larger than the ones you see on regular quadcopters and will use cold-gas jets to lift off and maneuver themselves. They need those, because Mars has a thin atmosphere and the other two target locations -- asteroids and the moon -- have no air. In addition, they'll have to be able to fly autonomously and recognize pre-programmed features of that particular celestial body, since there's no GPS out there and they'll be too far from Earth to be controlled by a ground team.

The engineers have already created three different prototypes for testing: a quadcopter five feet across, a functional palm-sized version of the first one used to test software, and a completely different model meant for asteroids kept inside a gimbal device, as you can see in the video below. The developers haven't decided on how the drones will collect samples yet, but they believe the machines can carry one tool and collect around seven grams of sample, whether liquid or solid, at a time. Since the drones are small enough, they also believe NASA can send out several along with one lander to ensure a mission's success. By the way, these drones might be meant for space, but they can be used here on Earth, as well, to explore volcanic areas and collect highly toxic materials.

In this article: curiosity, drone, mars, science, space
All products recommended by Engadget are selected by our editorial team, independent of our parent company. Some of our stories include affiliate links. If you buy something through one of these links, we may earn an affiliate commission.