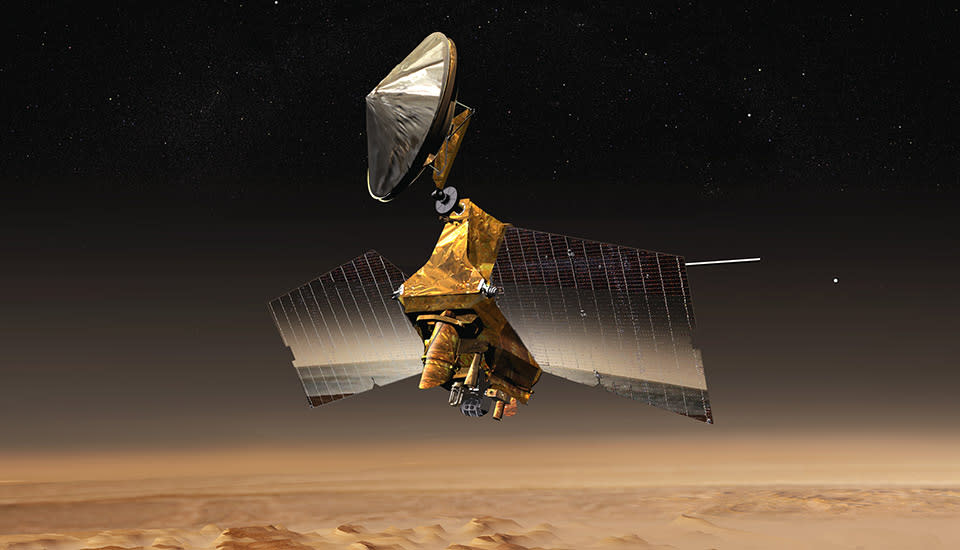 NASA's InSight Lander won't be reaching the red planet until 2016, but the Mars Reconnaissance Orbiter is already preparing for its welcome party. In order to make sure that it's at the right place to be able to receive radio transmissions from InSight during the landing process, the MRO is firing six intermediate-sized thrusters (it has one set of bigger and another set of smaller ones) for 77 seconds today, July 29th. Those thrusters are capable of producing five pounds of thrust each, and firing them will adjust the spracecraft's orbit timing from crossing the equator every 3PM local solar time to 2:30PM. The last time the MRO performed a maneuver of this magnitude was in 2006, and the next instances are scheduled to happen in 2016 and 2017 to return it to its original orbit timing.

When the Insight lander lifts off in March 2016, it will come with two CubeSats that will act as communications-relay satellites that can instantly transmit messages to the ground team. However, the MRO will also record those radio transmissions for later playback, just like it did for Curiosity and the Phoenix lander. That will serve as the official documentation of those critical minutes before InSight touches down and starts digging into the planet's surface.

In this article: insight, mars, MarsLander, MarsOrbiter, nasa, space
All products recommended by Engadget are selected by our editorial team, independent of our parent company. Some of our stories include affiliate links. If you buy something through one of these links, we may earn an affiliate commission.