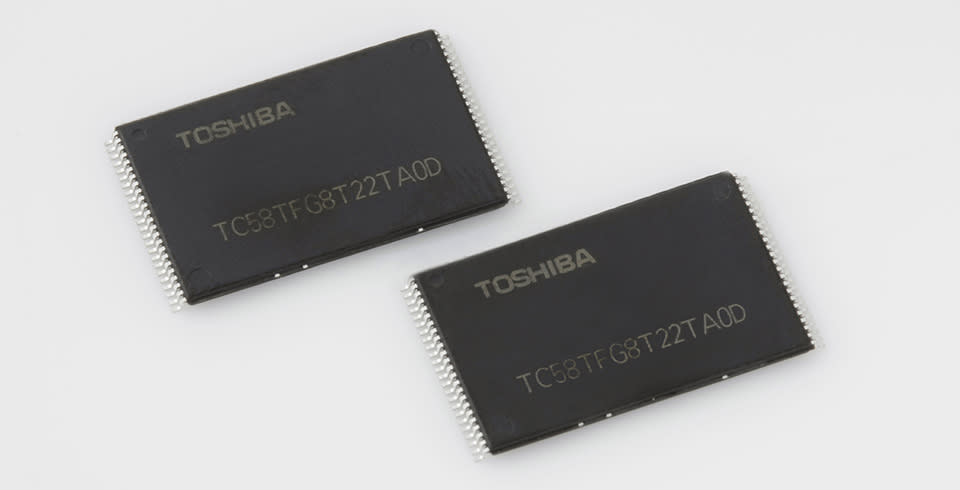 Judging by recent announcements, we're about to enter a golden age of fast, nearly unlimited storage for all the high-res selfies you can shoot. Following an announcement by Intel and Micron last week, Toshiba and partner SanDisk revealed their own 256Gb flash chips. Toshiba already has the smallest flash cells in the world at 15 nanometers, which it stacks in 48 layers to maximize density. The new chips add in 3-bit tech (first used by Samsung) to squeeze even more bytes in, helping it double the storage of chips it announced just a few months ago. The result will be faster and more reliable memory for smartphones, SSDs and other devices.

Intel and Micron announced 256Gb chips using different, 32-layer tech earlier this year, so they may beat Toshiba/SanDisk to the manufacturing punch. Consumers will be the main beneficiaries of the rivalry, in any case. Micron said the tech will eventually yield up to 10TB laptop drives at much lower prices per gigabyte than current models. It'll also result in cheaper and faster memory chips for smartphones and other mobile devices. Toshiba's in the process of building its new fab plant in Japan, and said the 256Gb chips will be available sometime in 2016.

In this article: 256Gb, BiCS, Flash, memory, NAND, SanDisk, SSD, Toshiba
All products recommended by Engadget are selected by our editorial team, independent of our parent company. Some of our stories include affiliate links. If you buy something through one of these links, we may earn an affiliate commission.